Horde of illegals ride 'The Beast' towards U.S. border (WHAT!?) - The Horn News 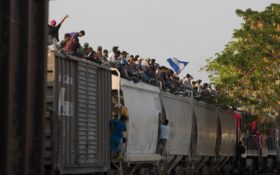 The train known as “The Beast” is once again rumbling through the night loaded with people headed toward the U.S. border after a raid on an illegal immigrant caravan threatened the practice of massive highway marches through Mexico

A long freight train loaded with about 300 to 400 illegal immigrants pulled out of the southern city of Ixtepec on Tuesday.

They sat atop rattling boxcars and clung precariously to ladders alongside the clanking couplings. Most were young men. One waved a Honduran flag from atop the train.

The train known in Spanish as “La Bestia,” which runs from the southern border state of Chiapas into neighboring Oaxaca and north into Gulf coast state Veracruz, carried Illegal immigrants north for decades, despite its notorious dangers: People died or lost limbs falling from the train. Mexican authorities started raiding the trains to pull illegal immigrants off in mid-2014 and the number of Central Americans aboard the train fell to a smattering.

But about a week ago, a longtime illegal immigrant rights activist, the Rev. Alejandro Solalinde, noticed a change: Large numbers of illegals started getting off the train in Ixtepec, the Oaxaca town where his Brothers on the Road shelter is located.

Many had waited weeks for Mexican visas that never materialized, and simply decided to head north without papers. Others were part of a 3,000-person illegal immigrant caravan that was broken up in a raid Monday by federal police and immigration agents on a highway east of Ixtepec.

With dozens of police and immigration checkpoints dotting the highways, many migrants now view the train as a safer, albeit still risky, way to reach the U.S. border.

“They’re riding the train again, that’s a fact,” said Solalinde, who shelter now houses about 300 train-riding illegal immigrants. “It’s going to go back to the way it was, the (Mexican) government doesn’t want them to be seen. If the illegal immigrants move quietly like a stream of little ants, they’ll allow them to, but they are not going to allow them to move through Mexico publicly or massively” as they did with the large caravans that began in October. In fact, Solalinde predicts “they’re not going to allow caravans anymore.”

In Monday’s raid, federal police and agents detained 371 people, wrestling men, women and children into patrol trucks and vans and hauling them off, presumably to begin deportation proceedings. Many other illegal immigrants abandoned the road and fled into the surrounding countryside.

The decision to turn to “The Beast” derives from several reasons.

With throngs of police pickups and small immigration vans parked at checkpoints up and down the narrow waist of southern Mexico, hitchhiking, taking buses or walking is no longer an option. Truckers, warned by the government that they could face fines, no longer give rides to the illegal immigrants as they did last year. Illegal immigrants are pulled off buses, and rounded up off the sides of highways when they stop to rest.

“Now we’re going by train because we can’t go on buses, because they won’t let us through,” said Rudi Margarita Montoya, the wife of a Honduran carpenter, who was perched atop a freight car with her young son and daughter and her husband.

Abbdel Camargo, a specialist on migration at the College of the Southern Border, said the Mexican government, under pressure from Washington, appears to be employing a strategy of containing illegal immigrants at certain points, dividing large groups, deporting people in certain circumstances and wearing illegal immigrants down with long waits for work visas.

Mexican authorities are “holding them back at specific points to turn the south of the country into a retaining wall,” Camargo said. And while illegal immigrants have resorted to caravans seeking safety in numbers, he said that following Monday’s raid many illegal immigrants will surely change their strategies: “They will immediately have to switch from visibility to invisibility, and that can make them more vulnerable and more at risk.”

It’s not as if the illegal immigrants think the train is safe; they acknowledge the dangers of riding through the darkness perched high atop the freight cars. Just like increased U.S. border protection, Mexico’s increased enforcement efforts push illegal immigrants into more extreme tactics.

Denis Funes, an illegal immigrant from central Honduras whose sun-beaten skin and leathery hands betray his past as a farmworker, says he saw a fellow Honduran knocked off the train the previous night by a low-hanging branch that caught the man in the face and sent him hurtling to the tracks below.

Funes and his companions could do nothing to help the man; the train was moving too fast to jump off. “He’s still back there somewhere,” Funes said. But he remains undeterred. “We’re going to rely on the train, despite everything we know that can happen to us.”

Gomez and many others were also driven to desperation by another change in Mexican policy. Whereas in late 2018 and early 2019 authorities were handing out humanitarian visas and processing asylum requests, they have now largely stopped doing so, instead making illegal immigrants wait weeks in the southern town of Mapastepec for visas that never seem to come.

Gomez said “They lied to us, they made us spend a month at the shelter, they told us they were going to give up papers but they never did.”

Enrique Valiente, a 19-year-old roofer from El Salvador who came to the U.S. at 3, was deported last May after a traffic stop.

He doesn’t even plan to sneak back into the United States; his dream is to use his perfect English to find work at a call center in the border city of Tijuana. But he can’t do that without papers.

“I asked [Mexico] to consider me for asylum and they just said ’No, you’ve been rejected.”

The train was popular for years, back when “caravan” just meant small Holy Week demonstrations by illegal immigrants on the Guatemala-Mexico border. Now, the train is popular once again. Solalinde compared it to trying to squeeze off a leaky garden hose: Wherever Mexican authorities crackdown, the illegal immigrants find an alternate route.

“Nobody is ever going to be able to stop the flow of migration,” Solalinde warned.