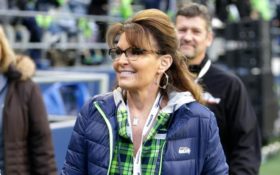 The New York Times stooped to a new low earlier this month, and tough-talking Former Alaskan Governor Sarah Palin isn’t letting them get away with it.

When Congressman Steve Scalise was shot and reported to be in critical condition, Americans nationwide shared prayers for the Republican and his family — except for The New York Times.

Instead, they capitalized on the act of terror and spun the story in a way to slam Republicans, claiming a 2011 shooting of  Democratic congresswoman Gabby Giffords was Palin’s fault.

Palin is suing the publication for defamation, after they falsely blamed her for the mass shooting that left six people dead, including a 9-year-old girl.

In the lawsuit filed in Manhattan federal court Tuesday, Palin’s lawyers say the Times “violated the law and its own policies” when it accused her of inciting the 2011 attack.

Sponsored: How to protect you and your family in crisis

Palin is seeking a minimum of $75,000 in damages which will be determined by a jury.

The lawsuit reads, “Mrs. Palin brings this action to hold The Times accountable for falsely stating to millions of people that she, a devoted wife, mother and grandmother, who committed a substantial portion of her adult life to public service, is part of a pattern of ‘lethal​’ politics and responsible for inciting an attack that seriously injured numerous people and killed six, including a nine-year-old girl who, at that time, was the same age as Mrs. Palin’s youngest daughter.”

It goes on to further slam the Times for their attempted apology, referencing the “half-hearted Twitter apologies, none of which sufficiently corrected the falsehoods that the paper published. In fact, none mentioned Mrs. Palin or acknowledged that Mrs. Palin did not incite a deranged man to commit murder.”

The Times editorial in question, titled, “America’s Lethal Politics,” was published June 14th and blamed an advertisement released by Palin’s political action committee for the mass shooting that killed six people, due to a map circulated by the group.

“Before the shooting, Sarah Palin’s political action committee circulated a map that showed the targeted electoral districts of Ms. Giffords and 19 other Democrats under stylized cross hairs,” the editorial read.

There is no evidence to prove that the shooter’s motive was related to Palin in anyway, according the The Daily Caller.

A spokeswoman for the Times, Danielle Rhoades Ha, says they haven’t seen the lawsuit but will defend against any claim vigorously.

A defense that is likely going to be hard to sell.