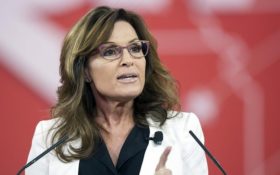 Senator Elizabeth Warren has been throwing herself into the spotlight since Hillary Clinton’s embarrassing failure in November — and political experts believe Warren is using her anti-Donald Trump rhetoric to help her run against President Trump in the 2020 presidential election.

But all that media attention seems to be leaving her at a loss for words… because she was just busted plagerizing from leading conservative women!

Former Alaksa Gov. Sarah Palin slammed Warren on Tuesday after the liberal lawmaker tweeted a photo of herself with the caption “Fight like a girl.”

Warren later used the phrase another time in an interview with National Public Radio while promoting her new book.

Turns out Palin has been using the phrase for years, and immediately recognized Warren’s robbery — and didn’t hold back. Palin called Warren out for the hypocrisy behind it.

“I don’t know. Coming from liberals who urge women to claim victimization, ‘Fight like a girl’ just doesn’t sounds the same as when legit fighters for equality say it, mean it, live it, and will never give it up,” she told Breitbart.

Of course, Warren hasn’t bothered to respond to the accusations of plagiarism.

Palin has used the phrase on multiple occasions over the years, most recently three months ago in a Facebook post.

But Palin isn’t rattled by the identity theft.

She posted photos Thursday of her visit to the White House the previous night, and clearly has bigger and better things to do than worry about Warren stealing her catch-phrase to sell a book.

Seems like Warren could learn a thing or two about “fighting like a girl” from a real woman.