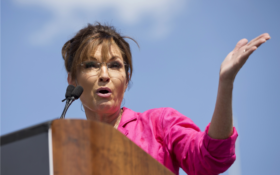 The Senate race in Alabama for Attorney General Jeff Sessions’ Senate seat is underway – and it’s creating even more division within the Republican party.

Trump announced his support for Strange in a tweet in August, and reiterated the endorsement with a Tweet sent before voting began Tuesday morning:

Luther Strange has been shooting up in the Alabama polls since my endorsement. Finish the job – vote today for "Big Luther."

But Palin has come out in the forefront of supporters for Moore, using Trump’s name to convince voters to support him.

According to Palin, the movement that pushed Trump into the White House is with her in backing Moore, and she seems confident he will have success in the race.

Palin called Moore a “happy warrior,” in an interview with Breitbart.

She continued, “This is what we need, the happy warriors who are in it for the right reason. They’re in it for a reason, not just a season and not just a business for them.”

“Judge Moore, he’s got the right people on his side, especially those who are in office noe who have been bold enough to put their reputations on the line and come out and endorse and say ‘yeah, we want to work with him back in D.C. because he’s going to be on the people’s side and he’ll have the people’s back.”

And she’s not alone in disagreeing with Trump in this election.

Trailing in the polls, Strange has looked to the White House to help make up ground against Moore, the former Alabama chief justice who is best known for defiant stands against gay marriage and for the public display of the Ten Commandments. Vice President Mike Pence campaigned for Strange in Birmingham, Alabama.

“All of Washington is watching to see what Alabama does,” Moore said at a south Alabama rally attended by Bannon, Brexit leader Nigel Farage, and “Duck Dynasty” star Phil Robertson.

In addition to Trump, Strange is backed by Senate Majority Leader Mitch McConnell, who has pumped millions of dollars into the Alabama race on behalf of Strange.

“Mitch McConnell needs to be replaced and your vote tomorrow may determine that,” Moore said in a line that garnered some of his loudest applause of the night.

Bannon told the crowd that Alabama can show the world “that this populist, nationalist, conservative movement is on the rise.”

Propelled by his support from evangelical voters, Moore led Strange by about 25,000 votes in the crowded August primary and runoff polls have shown him leading, or in a dead heat with, Strange.

Trump on Monday continued his push for Strange. Speaking to several hundred supporters at an airplane hangar in Birmingham, Pence said Strange had been a “real friend” to the Trump administration.

“Luther Strange is going to be a great senator. He already has, and he has already helped me,” Trump said on the “Rick & Bubba” radio show.

It’s creating a true divide in the Republican party, and only time will tell who will officially replace Sessions in the Senate.