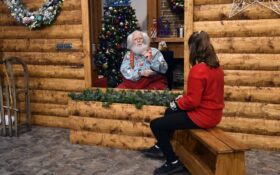 Santa is back this year, but he pleads caution as he continues to tiptoe through the pandemic.

“Be smart. Be caring. If you have the tiniest tickle in your throat, the tiniest feeling, worry about yourself and worry about everybody else, and know Santa will always be there next year,” said 57-year-old Kevin Chesney, who’s been donning the big red suit since he was a kid.

Amid a downturn in Jolly Old Elves — about 15 percent fewer in one large database — Chesney is busier than ever from his North Pole in Moorestown, New Jersey. The photo studio where he works quickly sold out its 4,500 appointments to sit with him and the seven other Santas in the studio’s stable.

They’re among the brave in Santa’s ranks with full-contact visits, lap sitting included, though Chesney wears a mask until just before the photos are taken.

Other Santas might not be wearing masks or plastic face shields, or hanging out in protective snow globes like many did last year, but it seems 50-50 this season that they’re not quite ready for hugs, whispers in their ears for secret wishes, and kids smiling or sobbing on their knees.

Some Santas will remain behind barriers that popped up last year for safety. At Minnesota’s Mall of America, the big man will be housed in a log cabin behind a window with guests seated on benches in front of him. At 169 locations for the outdoor retailers Bass Pro Shops and Cabela’s, benches will also be used, with plastic partitions deployed at some stores for Santa’s photo ops.

Other retailers and Santa hosts are offering the option of no or full contact, even when mandates to distance aren’t in place. And many require or encourage reservations online to cut down on the number of people waiting.

More than 10 million U.S. households visited Santa in a mall or store in 2019, according to GlobalData Retail’s managing director, Neil Saunders. Nearly 73% of them also spent money at nearby restaurants or stores, he said. Last year, the company’s research found that 6.1 million households visited Santa, with fewer retailers and malls offering the holiday star in person. Of those visitors, 62% ate or shopped nearby.

Saunders said projections this year have about 8.9 million households expected to visit Santa in person, with virtual visits still a big option.

“Lingering concerns about the virus and ongoing restrictions in some states and localities continue to act as a brake on visiting Santa in person,” he said.

Chris Landtroop, a spokeswoman for Santa vendor Cherry Hill Programs, is optimistic. The new rollout of vaccinations for children 5 to 11 will certainly help.

“Santa is so back and we are super excited about that. Last year was incredibly tough,” Landtroop said.

The company has been sourcing Santas all year for the 800 malls, big-box stores and other locations it serves, with options for no-contact visits, too. Cherry Hill requires its Santas and other employees to be vaccinated and those with exemptions to be tested regularly.

“At the end of the day, we want guests to feel comfortable,” Landtroop said.

Luther Landon has been providing the Santa Experience at Mall of America in Bloomington, Minnesota, for nearly two decades. Last year, he hit on the log cabin idea but was shut down after a day due to the pandemic. He pivoted to virtual Santa and this year will offer both.

“We think that it would be very irresponsible of us to just ignore it and pretend like everything’s back to normal,” he said of the pandemic. “We’ve hidden some microphones so Santa can hear just fine. I know from our Santa community and knowing so many other Santas that the majority of them are reluctant, highly reluctant, to go back to the way it was before the pandemic. But we also have some who are just like, you know what, I don’t care. Having both of those groups is what’s happening in the country, too.”

Russell Hurd in Royse City, Texas, has been playing Santa since 2017, after he retired from the Army. He’ll be in his red suit to go with his long — and very real — white beard at the Gaylord Texan Resort & Convention Center near Dallas. His visits with the throngs are distanced and masks are required. He longs for that to end.

“The way it used to be, it’s meaningful for us Santas, too. I mean, we’re human beings. We crave that interaction, but for now we do what we can,” Hurd said.

Hurd is unvaccinated and tests regularly for COVID.

“I know a lot of unvaxxed Santas across the country. I mean, it’s not just Texas,” he said.

At Macy’s stores, Santa will be making his list and checking it twice from behind a desk, with guests seated on the other side.

“We’re encouraging everyone to maintain masking throughout their visits,” said Kathleen Wright, senior manager at Macy’s Branded Entertainment. “Santa has been a part of the Macy’s tradition since 1862 so we’re overjoyed that we can safely continue the tradition this year.”

At Oakbrook Center, a mall in suburban Chicago owned by Brookfield Properties, Santa’s spot is a tricked-out motorhome with his fans allowed inside. Santa will be happening at 117 of 132 malls Brookfield owns in 43 states. The company is following local mandates on safety protocols but will distance anyone who asks. The same goes for CBL Properties, which owns 63 malls in 24 states and offered Santa visits from a safe distance last year.

“We’re bringing back a more traditional Santa experience this year,” said CBL spokeswoman Stacey Keating. “Visitors who wish to do so will be able to sit on Santa’s lap or on Santa’s bench. Masks will not be required at the set or during photos unless there’s a local mandate in place.”

And, bonus: “We’re also bringing back pet photo nights with Santa,” she said, “as well as Santa Cares, a reservation-only event that caters to those with sensory sensitivities and for whom the traditional experience may be too overwhelming.”

The pandemic has taken its toll on Santa in other ways.

Stephen Arnold, the 71-year-old head of IBRBS (formerly the International Brotherhood of Real Bearded Santas) said his organization of about 2,000 Santas and Mrs. Clauses has lost 57 Santas to COVID.

“Most of us are overweight, diabetic, with heart conditions,” said Arnold, a long-time Santa working this year both virtually and in person in Memphis, Tennessee. “I mean, we’re prime targets for a disease like COVID.”