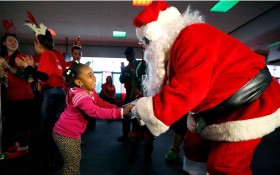 A man has paid off more than $106,000 in shoppers’ layaways at two Wal-Mart stores in northeast Ohio.

WEWS-TV in Cleveland reports that the man told Wal-Mart employees that he liked to do something special on his birthday every year. They say he insisted on remaining anonymous.

The donor paid off a total of nearly $70,000 for the layaway items at the Steelyard Commons store in Cleveland and about $36,000 for items in Lorain. Items on layaway included toys, 70-inch televisions and even a pair of socks.

Tara Neal said she had paid $10 on a bed for her 3-year-old daughter at one of the stores when she was told Tuesday that the remaining balance of more than $80 was paid. She said it was “like Santa.”