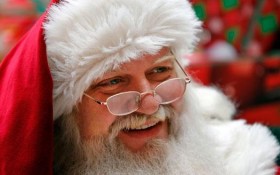 Good news – Santa Claus has been chosen to represent the people of North Pole… For real.

The Fairbanks Daily News-Miner reports that a man, whose legal name is Santa Claus, won a write-in campaign for an open City Council seat in the 2,200-person Alaska town of North Pole.

He began campaigning in his red velvet suit just two weeks before the Oct. 6 election. Claus received 58 votes and a seat on the six-person Council.

No official candidates had filed for the two City Council positions. The second open seat was won by write-in candidate Elyse Dawson, a youth pastor at the North Pole Assembly of God.

Claus is the former president of the North Pole Chamber of Commerce.