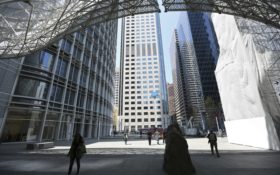 Coined the “Grand Central of the West,” the new Salesforce Transit Center near the heart of downtown is expected to accommodate 100,000 passengers each weekday, and up to 45 million people a year. It welcomed its first passengers and visitors this month.

Enveloped in wavy white sheets of metal veil, the five-level center includes a bus deck, a towering sky-lit central entrance hall and a rooftop park with an outdoor amphitheater.

The San Francisco Chronicle reported that the complex faced delays in putting out contracts to bid, and the winning bids were ultimately higher than expected. The terminal’s cost rose from $1.6 billion at its 2010 groundbreaking to more than $2 billion in 2016 because of what one analyst called “optimistic assumptions,” according to the Chronicle.

The project, a commanding presence in the city’s South of Market neighborhood, is financed by land sales, federal stimulus grants, district fees and taxes, bridge tolls, and federal and state funds.

On a recent weekday, the rooftop park was flooded with locals and tourists who were enjoying the sunny weather for picnics.

“I think it’ll be like the High Line in New York,” said Lissa Gould, 65, who likened the new park to New York’s 1.5 mile (2.4 kilometer) greenbelt that was built on a defunct elevated railroad line. Gould attended the San Francisco terminal’s Aug. 12 grand opening celebration and returned the following week with her two nieces.

“It’s great for the workers and people downtown who will be able to come down here, and there’s free activities for children too,” she said.

Others herald the terminal as the American West’s “Grand Central,” a reference to New York City’s world-famous Grand Central Terminal opened in 1913. That train station accommodates 750,000 visitors daily and has been featured in numerous well-known movies.

Yet to be completed at San Francisco’s center are restaurants, retail shops and a gondola. There also are plans for a three-platform train station underground and eventually, connections to a high-speed rail line under construction in California’s Central Valley.

San Francisco native Clemente Casas, 82, enjoyed a walk with his wife through the outdoor gardens. He said the center was a welcome replacement for the 1930s-era Transbay Terminal that was demolished in 2010.

A new bus bridge provides direct access from the transit center to the Bay Bridge, which Casas said he hopes will reduce traffic congestion.

Fabiana Edmundo was impressed by the elevated park, which features open grass areas with portable chairs, a playground, kiosks with board games and art supplies, and books for children and adults. The 34-year-old mother of four runs a childcare company and said she’d be back soon with more kids.

The online business software company Salesforce, which opened its adjacent 61-story Salesforce Tower three months ago, bought naming rights to the center in 2017 as part of a 25-year, $110 million sponsorship agreement.