San Fran pays POO PATROLS... how much!? - The Horn News 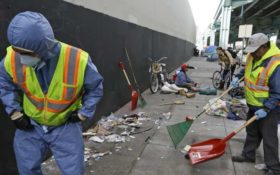 You don’t need a time machine or an alternate reality device to see the future of America under liberal rule. It’s happening – it’s happening all over the country, right now – and the results have been absolutely disastrous. In San Francisco’s case, it’s downright disgusting.

Some of the America’s once-proud big cities are collapsing under leftist mismanagement and sinking into literal piles of excrement — and they’re paying city workers an eyeboggling $185,000 a piece to clean it up.

There’s no better example of that than San Francisco, the one-time shining City By The Bay, where a new scandal finds big waste… in cleaning up piles of human waste covering their streets.

The city’s massive homeless crisis is only getting worse under liberal policies. It’s so bad some are not only literally living on the street, but using the sidewalks as a toilet.

Pedestrians have to dodge biological landmines just going out for a stroll!

ZeroHedge notes there were some 16,000 feces complaints in the city in a single week over the summer, leading the city to create an actual “poop patrol” to head out and clean up.

It’s a disgusting job, but someone has to do it – and they’re being paid an eyewatering amount for it, too. The San Francisco Chronicle reports that these patrollers make a salary of $71,760 a year.

Good money… and that’s only a piece of the picture.

They also get more than $100,000 in benefits, bringing the total salary and benefits package for each pooper scooper to $184,678… every year!

And that’s just a drop in the… er… toilet. They’re given equipment and power washers and transportation, too.

Fighting the rising tide of human waste costs San Francisco $12 million a year, which is a sixth of city’s entire street cleaning budget.

That includes more than $3 million in porta-potties and nearly a million more for the fecal force.

They even spend more than $2 million to steam-clean the streets – because when they’re covered in poop, a sweeper just isn’t gonna do the trick!

“We’re spending a lot of money to address this problem,” Mayor London Breed told The Chronicle.

That’s the scoop on San Francisco.

But the problem isn’t limited to the Left Coast as liberal mismanagement causes other major cities to practically collapse.

Over in New York, Mayor Bill de Blasio has increased total spending by nearly 15 percent EVERY YEAR, including $1.7 billion for the homeless.

No word if that money includes dedicated full-time pooper scoopers.

Of course, it’s both decent and humane for cities to help the homeless. However, New York City’s program is neither. It’s notoriously poorly run, overrun with corruption, cronyism and failed programs, not to mention dangerous shelters.

They have roughly 75,000 homeless, meaning the city spends close to $23,000 a person and STILL hasn’t made any headway in truly helping them.

Other Democrat-run cities are facing even bigger problems.

Detroit has now had more than half a century of Democratic rule. It went bankrupt and is now the poorest big city in the nation. Chicago has an even longer history under Democratic rule, and is notorious for not just being broke but also violent.

Baltimore, Philadelphia, St. Louis and more are all bastions of longtime Democratic rule… and all struggling with broken budgets, high poverty and so much violent crime that people are literally fleeing.

America’s cities are supposed to be laboratories of democracy, a chance to see how programs work on the smaller scale before possibly bringing them to the rest of the nation.

But it seems under Democratic leadership, these labs are floating in the toilet.