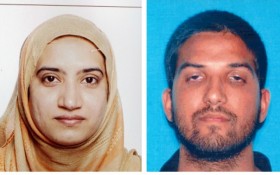 A homemade bomb left behind by the husband and wife who perpetrated a mass shooting at a California social services center failed to detonate because it was poorly constructed, two law enforcement officials told The Associated Press.

The failure compelled Syed Rizwan Farook, 28, and Tashfeen Malik, 29, to drive around the area of San Bernardino, California, after the shootings that killed 14 people. They were apparently trying to set off the remote-controlled bomb, one of the officials said.

The officials were briefed on the investigation and spoke on condition of anonymity because they weren’t authorized to discuss the case publicly.

Investigators believe the couple intended to detonate the improvised explosive device — placed in a bag left at the center that morning by Farook before the shooting — to kill emergency responders or possibly before their attack.

The plan to set off an explosive device as part of a wave of attacks is similar to an aborted 2012 plan by Farook and his longtime friend Enrique Marquez, who has been charged for his role in aiding the violence. The pair planned to explode pipe bombs on a freeway and then shoot emergency responders.

The device found at the scene in San Bernardino consisted of three pipe bombs, constructed with Christmas tree lights and attached to a remote-control toy car switched to “on.” The couple had the remote with them in their rented SUV. It was found after the shootout.

The FBI is still trying to determine where the couple was or what they did during 18 minutes between the Dec. 2 attack and a shootout with authorities that left them dead.

Investigators have no details on the couple’s whereabouts between 12:59 p.m. and 1:17 p.m. that day and worry that they may have met with someone, dropped by a storage unit or visited a residence. Authorities accounted for the couple’s movements using traffic and surveillance cameras, witness accounts and other techniques.

While driving around San Bernardino and Redlands afterward, the couple appeared to drive aimlessly and stopped multiple times over a roughly 20-mile area, according to the FBI. They never strayed far from the location of their initial attack, and at one point appeared to be trying to drive closer. Farook and Malik also stopped by a nearby lake, which a dive team searched unsuccessfully for days, trying to find any abandoned electronic devices.

Detectives watching the area saw the couple driving toward their home in the SUV, and Farook and Malik died in a shootout with authorities.

One of the officials said the hard drive has still not been found, and the two cellphones, which were sent to the FBI lab, were so badly crushed that investigators have not yet been able to conduct a forensic examination on them.

One rifle used in the attack was modified in what appears to be an effort to make the gun fully automatic. But despite the installation of the required parts, the machining wasn’t done properly and so the effort was unsuccessful, one official said. The errors constructing the explosive device and modifying the gun may indicate that the two killers were self-taught, but without potential electronic evidence on the couple’s computer hard drive and phones, it is hard to know for sure, officials said.

The FBI has said there’s no evidence that the attack was directed from overseas.