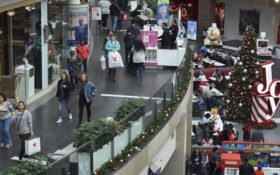 The National Retail Federation, the nation’s largest retail trade group, says it expects sales in November and December to rise between 4.3 percent and 4.8 percent to $717.45 billion to $720.89 billion as shoppers continue to be in a spending mood in a stronger economy.

The sales growth marks a drop from last year’s 5.3 percent, which was the largest gain since 2010 when it was 5.2 percent. But the figure is still healthy and is the latest indication that the retail industry is far from an apocalypse that some feared only a year ago.

While stores like Sears Holdings Inc. and J.C. Penney are struggling, plenty of others are seeing robust sales helped by their own reinvention efforts and a solid economic backdrop. The unemployment rate is near a 50-year low and the number of job openings is exceeding the number of unemployed. And consumer confidence shot up to an 18-year high in September, according to the Conference Board.

Retailers are also working hard to reinvent their businesses, like speeding up their deliveries and remodeling their stores as they try to better compete with online leader Amazon.

Still, a stronger economy is creating headaches for many retailers as they try to find qualified temporary workers. NRF expects retailers to hire between 585,000 and 650,000 temporary workers this holiday season, up from last year’s 582,500.

Retailers have been raising wages or offering other perks for hourly workers in areas where the labor market is very tight. But Amazon increased the stakes heading into the critical holiday season, when it announced Tuesday it will increase its minimum wage to $15 an hour.

Retailers are also monitoring the impact on tariffs that have been slapped on a variety of different goods imported from China, although holiday merchandise will likely not be affected because they’re already in U.S. warehouses. Any price increases are expected to come starting early 2019. Still, some experts believe the looming issue over tariffs could temper consumer confidence during the season.

The NRF forecast, which considers economic indicators such as consumer credit, disposable personal income and monthly retail sales, excludes sales from autos, gas, and restaurants but includes online spending and other non-store sales like those from catalogs.

Holiday forecasts from Deloitte, AlixPartners and PwC have come in a range of 3.1 percent to 5.6 percent.

Steve Barr, consumer markets leader at PwC, said he believes that a broad swath of retailers will have a solid holiday season.

“I see very little in the way of risks for 2018 with the exception of something that is uncontrollable like a geopolitical event or bad weather,” he added.