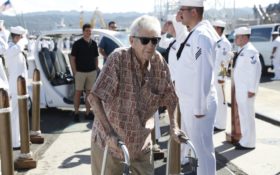 Ray Emory survived the early morning attack on Pearl Harbor that killed nearly 2,400 servicemen in shower of bombs and explosions nearly 80 years ago.

The 97-year-old never forgot those who died that day, spending the past few decades doggedly pushing for the remains of those buried as unknowns to be identified and returned to their families.

Clutching a walker and stepping tentatively, Emory returned to Pearl Harbor for one last visit before he leaves his Hawaii home to live in Boise, Idaho, with his son.

He expected to stop at the pier where his ship, the USS Honolulu, was moored on Dec. 7, 1941, and stay for three or four minutes and then go home.

Instead more than 500 sailors stood side-by-side on ships and piers to surprise him. They greeted him with salutes as he arrived on a golf cart and shouted cheers of “Hip, Hip, Hooray!”

Lt. Ryan Donohue, chief engineer on USS O’Kane, said it was important for sailors to remember those who sacrificed on Dec. 7.

“I think it’s important that we know where we come from — the different events that transpired, about how we have our freedom today,” he said.

Emory took the microphone during a ceremony in his honor and recited the names of dozens of ships that were in Pearl Harbor the day of the attack.

Emory is leaving Hawaii because his wife died about a month ago and he doesn’t have family in the islands. He plans to go fishing in Idaho.

During the attack on Pearl Harbor, Emory managed to fire a few rounds at the airplanes that dropped the torpedoes. He still has an empty bullet casing that fell to his ship deck.

In 2012, the Navy and National Park Service recognized Emory for his work with the military and Department of Veterans Affairs to honor and remember Pearl Harbor’s dead.

Bureaucrats didn’t welcome his efforts, at least not initially. Emory says they politely told him to “’go you-know-where.’” It didn’t deter him.

First, thanks to legislation sponsored by the late U.S. Rep. Patsy Mink of Hawaii, he managed to get gravestones for unknowns from the USS Arizona marked with name of their battleship.

In 2003, the military agreed to dig up a casket that Emory was convinced, after meticulously studying records, included the remains of multiple USS Oklahoma servicemen. Emory was right, and five sailors were identified.

It helped lay the foundation for the Pentagon’s decision more than a decade later to exhume and attempt to identify all 388 sailors and Marines from the Oklahoma who had been buried as unknowns in a national cemetery in Honolulu.

Since those 2015 exhumations, 138 sailors from the Oklahoma have been identified. About 77 have been reburied, many in their hometowns, bringing closure to families across the country.

“Ray, you’re the man that did it. There’s nobody else. If it wasn’t for you, it would have never been done,” Jim Taylor, the Navy’s liaison to Pearl Harbor survivors, told Emory during the brief ceremony Tuesday at the USS Honolulu’s old pier.

Taylor predicted Emory would return to his research on unknowns once he’s in Idaho.

“He’ll do this until the day he joins his wife in heaven,” Taylor said.

Some of the remains, especially those burned to ash, will never be identified. But the military aims to put names with 80 percent of the Oklahoma servicemen who were dug up in 2015.

It was the second-largest number of dead from one vessel. The USS Arizona lost 1,177 sailors and Marines. Most of those killed on the Arizona remain entombed in the sunken hull of the battleship.

The Pentagon has also exhumed the remains of 35 servicemen from the USS West Virginia from Honolulu’s National Memorial Cemetery of the Pacific. None have been identified so far.