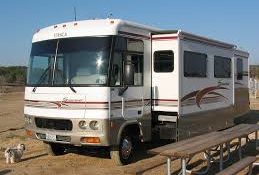 A woman driving a large RV entered a fast-food drive through the wrong way and got stuck, police in eastern Washington say.

Kennewick police said 56-year-old Anastacia Etzwiler was taken into custody on suspicion of driving under the influence early Friday.

The large RV became wedged against the corner of a Taco Bell restaurant after getting stuck making a sharp right turn on the narrow drive-through.

Etzwiler was booked into the Benton County Jail. It’s not clear from online records if she has an attorney.