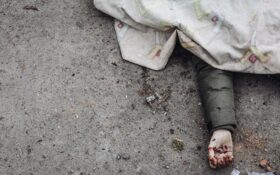 Ten months into Russia’s latest invasion of Ukraine, overwhelming evidence shows the Kremlin’s troops have waged total war, with disregard for international laws governing the treatment of civilians and conduct on the battlefield.

Ukraine is investigating more than 58,000 potential Russian war crimes — killings, kidnappings, indiscriminate bombings, and sexual assaults. Reporting by The Associated Press and “Frontline,” recorded in a public database, has independently verified more than 600 incidents that appear to violate the laws of war. Some of those attacks were massacres that killed dozens or hundreds of civilians and as a totality it could account for thousands of individual war crimes.

As Karim Khan, chief prosecutor of the International Criminal Court in The Hague, told the AP, “Ukraine is a crime scene.”

That extensive documentation has run smack into a hard reality, however. While authorities have amassed a staggering amount of evidence — the conflict is among the most documented in human history — they are unlikely to arrest most of those who pulled the trigger or gave the beatings anytime soon, let alone the commanders who gave the orders and political leaders who sanctioned the attacks.

The reasons are manifold, experts say. Ukrainian authorities face serious challenges in gathering air-tight evidence in a war zone. And the vast majority of alleged war criminals have evaded capture and are safely behind Russian lines.

Even in successful prosecutions, the limits of justice so far are glaring. Take the case of Vadim Shishimarin, a baby-faced 21-year-old tank commander who was the first Russian tried on war crimes charges. He surrendered in March and pleaded guilty in a Kyiv courtroom in May to shooting a 62-year-old Ukrainian civilian in the head.

The desire for some combination of justice and vengeance was palpable in that courtroom. “Do you consider yourself a murderer?” a woman shouted at the Russian as he stood bent forward with his head resting against the glass of the cage he was locked in.

“What about the man in the coffin?” came another, sharper voice. A third demanded the defense lawyer explain how he could fight for the Russian’s freedom.

The young soldier was first sentenced to life in prison, which was reduced to 15 years on appeal. Critics said the initial penalty was unduly harsh, given that he confessed to the crime, said he was following orders and expressed remorse.

Ukrainian prosecutors, however, have not yet been able to charge Shishimarin’s commanders or those who oversaw him. Since March, Ukraine has named more than 600 Russians, many of them high-ranking political and military officials, as suspects, including Minister of Defense Sergei Shoigu. But, so far, the most powerful have not fallen into Ukrainian custody.

“It would be terrible to find a scenario in which, in the end, you convict a few people of war crimes and crimes against humanity who are low-grade or mid-grade military types or paramilitary types, but the top table gets off scot-free,” said Philippe Sands, a prominent British human rights lawyer.

Throughout the war Russian leaders have denied accusations of brutality.

Moscow’s U.N. ambassador, Vassily Nebenzia, said no civilians were tortured and killed in the Kyiv suburb of Bucha despite the meticulous documentation of the atrocities by AP, other journalists, and war crimes investigators there.

“Not a single local person has suffered from any violent action,” she said, calling the photos and video of bodies in the streets “a crude forgery” staged by the Ukrainians.

Such statements have been easily rebutted by Ukrainian and international authorities, human rights groups and journalists who have meticulously documented Russian barbarity since the Kremlin ordered the unprovoked invasion in February.

Part of that effort, the AP and Frontline database called War Crimes Watch Ukraine, offers a contemporaneous catalog of the horrors of war. It is not a comprehensive accounting. AP and Frontline only included incidents that could be verified by photos, videos or firsthand witness accounts. There are hundreds of reported incidents of potential war crimes for which there was not enough publicly available evidence to independently confirm what happened.

Still, the resulting database details 10 months of attacks that appear to violate the laws of war, including 93 attacks on schools, 36 where children were killed, and more than 200 direct attacks on civilians, including torture, the kidnapping and killing of civilians, and the desecration of dead bodies. Among Russia’s targets: churches, cultural centers, hospitals, food facilities and electrical infrastructure. The database catalogs how Russia utilized cluster bombs and other indiscriminate weapons in residential neighborhoods and to attack buildings housing civilians.

An AP investigation revealed that Russia’s bombing of a theater in Mariupol, which was being used as a civilian shelter, likely killed more than 600 people. Another showed that in the first 30 days after the invasion, Russian forces struck and damaged 34 medical facilities, suggesting a pattern and intent.

“That’s a crime against the laws of war,’ said Stephen Rapp, a former U.S. Ambassador-at-Large for War Crimes. “Once somebody’s injured, they’re entitled to medical care. You can’t attack a hospital. That’s the oldest rule we have in international law.”

Experts say Russia under President Vladimir Putin has repeatedly ignored the rules established by the Geneva Conventions, a series of treaties that dictate how warring countries should treat each other’s citizens, and the Rome Statute, which established the International Criminal Court and defined specific war crimes and crimes against humanity.

“These abuses are not the acts of rogue units; rather, they are part of a deeply disturbing pattern of abuse consistent with what we have seen from Russia’s prior military engagements — in Chechnya, Syria, and Georgia,” said Beth Van Schaack, the U.S. Ambassador at Large for Global Criminal Justice, speaking earlier this month at the International Criminal Court in The Hague, Netherlands.