Russia's ambassador to the UN dies suddenly - The Horn News 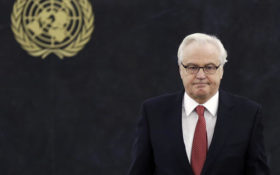 Russia’s ambassador to the United Nations who died suddenly after falling ill at his office at Russia’s U.N. mission is being remembered by his diplomatic colleagues as a powerful and passionate voice for his nation.

Vitaly Churkin was taken to a hospital, where he died Monday, according to Russia’s deputy U.N. ambassador, Vladimir Safronkov. Churkin would have turned 65 Tuesday. The cause of his death was not immediately known.

Churkin had been Russia’s envoy at the United Nations since 2006. He was the longest-serving ambassador on the Security Council, the U.N.’s most powerful body.

U.N. Secretary-General Antonio Guterres called him “a uniquely skilled diplomat, a powerful orator with great wit, and a man of many talents and interests.”

“Although we served together for a short time, I greatly appreciated the opportunity to work with him and will deeply miss his insights, skills and friendship,” Guterres said in a statement.

Diplomatic colleagues from around the world mourned Churkin as a master in their field, saying he had both a deep knowledge of diplomacy and a large and colorful personality.

U.S. Ambassador Nikki Haley said that while she and Churkin did not always agree, “he unquestionably advocated his country’s positions with great skill.”

Her predecessor, Samantha Power, described him on Twitter as a “diplomatic maestro and deeply caring man” who had done all he could to bridge differences between the U.S. and Russia.

Those differences were evident when Power and Churkin spoke at the Security Council last month, when she lashed out at Russia for annexing Ukraine’s Crimean Peninsula and for carrying out “a merciless military assault” in Syria. Churkin accused Democratic former President Barack Obama’s administration, which Power served, of “desperately” searching for scapegoats for its failures in Iraq, Syria and Libya.

Churkin died weeks into some major adjustments for Russia, the U.N. and the international community, with a new secretary-general at the world body and a new administration in Washington. Meanwhile, the Security Council is due this week to discuss Ukraine and Syria.

From Moscow’s vantage point, “Churkin was like a rock against which were broken the attempts by our enemies to undermine what constitutes the glory of Russia,” TASS quoted Deputy Foreign Minister Sergei Ryabkov as saying.
—
Watch: Alzheimer’s-reversing “cocktail” recipe [sponsored]

Churkin’s U.N. counterparts “experienced and respected the pride that he took in serving his country and the passion and, at times, very stern resolution that he brought to his job,” said General Assembly President Peter Thomson, of Fiji. But colleagues also respected Churkin’s intellect, diplomatic skills, good humor and consideration for others, said Thomson, who called for a moment of silence at the start of an unrelated meeting Monday.

Churkin emerged as the face of a new approach to foreign affairs by the Soviet Union in 1986, when he testified before the U.S. Congress about the Chernobyl nuclear plant disaster. It was rare for any Soviet official to appear before Congress.

In fluent English, Churkin provided little new information about Chernobyl but engaged in a friendly, sometimes humorous, exchange with lawmakers who were not accustomed to such a tone — or to a representative in a fashionably well-fitting suit and a stylish haircut — from the U.S.S.R.

After he returned to the foreign ministry in Moscow, he ably dodged questions and parried with Western correspondents, often with a smile, at briefings in the early 1990s. Within the government, he proved himself an able and flexible presence who survived numerous course changes after the dissolution of the Soviet Union. He held ambassadorships in Canada and Belgium, among other posts.

Churkin told Russia Today in an interview this month that diplomacy had become “much more hectic,” with political tensions rising and stability elusive in various hotspots. At the time, he looked in good health, reporter Alexey Yaroshevsky tweeted Monday.