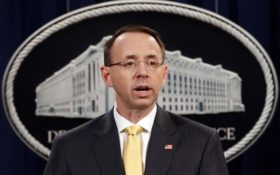 The indictment, brought by the office of special counsel Robert Mueller, alleges that Russians used bogus social media postings and advertisements fraudulently purchased in the name of Americans to sway political opinion during the race between Republican Donald Trump and Hillary Clinton, his Democratic opponent.

The charges are the most direct allegation to date of illegal Russian meddling in the election.

The goal, the indictment says, was to “sow discord in the U.S. political system, including the 2016 presidential election.”

The charges arise from Mueller’s investigation into Russian interference in the election and whether there was improper coordination between the Trump campaign and the Kremlin.

The indictment details an elaborate plot to interfere in the 2016 U.S. presidential election.

The deputy attorney general says a new indictment does not allege that Russian meddling altered the outcome of presidential election.

One of those indicted in the Russia probe is a businessman with ties to Russian President Vladimir Putin.

Yevgeny Prigozhin is an entrepreneur from St. Petersburg who’s been dubbed “Putin’s chef” by Russian media.

His restaurants and catering businesses have hosted the Kremlin leader’s dinners with foreign dignitaries. In the more than 10 years since establishing a relationship with Putin, his business has expanded to services for the military.

Prigozhin’s assets also include an oil trading firm that reportedly has been sending private Russian fighters to Syria. Prigozhin is on the list of those sanctioned by the U.S.