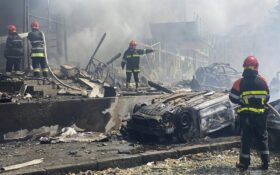 Russian missiles that struck a city in central Ukraine killed at least 20 people and wounded about 90 more Thursday, Ukrainian authorities said. The country’s president called the attack “an open act of terrorism” against civilians in locations without military value.

A Russian submarine in the Black Sea fired Kalibr cruise missiles at the city, and three children were among the dead, the deputy head of Ukraine’s presidential office, Kyrylo Tymoshenko, wrote on the Telegram messaging app. The Russian military has not confirmed the strike.

Ukrainian President Volodymyr Zelenskyy suggested the attack was deliberately aimed at civilians. The strike happened as government officials from about 40 countries met in The Hague to discuss coordinating investigations and prosecutions of potential war crimes committed in Ukraine.

“Every day Russia is destroying the civilian population, killing Ukrainian children, directing missiles at civilian objects. Where there is no military (targets). What is it if not an open act of terrorism?” Zelenskyy wrote on Telegram.

Vinnytsia is one of Ukraine’s largest cities, with a population of 370,000. Thousands of people from eastern Ukraine, where Russia has concentrated its offensive, have fled there since the start of the war.

The missiles ignited a fire that spread to engulf 50 cars in an adjacent parking lot, officials said. Ukrainian police said people were reported missing. The governor of the Vinnytsia region, Serhiy Borzov, said Ukrainian air defense systems shot down another four missiles over the area.

Before the missiles hit Vinnytsia, the president’s office reported the deaths of five civilians and the wounding of another eight in Russian attacks over the past day.

One person was wounded when a missile damaged several buildings in the southern city of Mykolaiv early Thursday, Ukrainian authorities said. A missile attack on Wednesday killed at least five people in the city.

Russian forces also continued artillery and missile attacks in eastern Ukraine, primarily in Donetsk province after overtaking adjacent Luhansk. The city of Lysychansk, the last major stronghold of Ukrainian resistance in Luhansk, fell to Russian forces at the beginning of the month.

Luhansk and Donetsk together make up the Donbas, a mostly Russian-speaking region of steel factories, mines and other industries.

“We are urging civilians to leave the region, where electricity, water and gas are in short supply after the Russian shelling,” Kyrylenko said in televised remarks. “The fighting is intensifying, and people should stop risking their lives and leave the region.”

The British Defense Ministry said Thursday that despite continued shelling in the Donbas region, Russian forces did not make major territorial gains in recent days.

“The aging vehicles, weapons and Soviet-era tactics used by Russian forces do not lend themselves to quickly regaining or building momentum unless used in overwhelming mass – which Russia is currently unable to bring to bear,” the British ministry said.

Both the Russian forces and Ukrainian militaries are seeking to replenish their depleted stocks of unmanned aerial vehicles to pinpoint enemy positions and guide artillery strikes.

Both sides are looking to procure jamming-resistant, advanced drones that could offer a decisive edge in battle. Ukrainian officials say the demand for such technology is “immense” with crowdfunding efforts underway to raise the necessary cash for purchases.