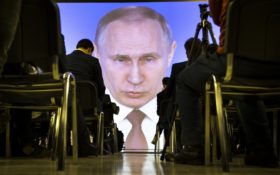 They are precise, small in size, able to effectively penetrate air defenses when fired in groups and, above all, they’re cheap.

In Russia’s unprovoked invasion of Ukraine, killer drones have cemented their reputation as a potent, cost-effective weapon that can seek out and destroy targets while simultaneously spreading the kind of terror that can fray the resolve of soldiers and civilians alike.

They’re also quickly surpassing missiles as the remote weapon of choice. Known as “the poor man’s cruise missile,” the flying death machines can flood any combat theater much more cheaply.

Russia’s buying waves of the Iranian-made Shahed drones and sending them over Ukraine, targeting power plants and other key infrastructure, crushing morale, and ultimately draining the enemy’s war chest and weapons as they try to take them out.

Russian official did not understand that his microphone was already on and asked the hosts: “don’t rock the boat” and don't talk too much about Iran pic.twitter.com/qkxX7uE3Ot

We explain the war of the drones —

HOW DO WARTIME DRONES WORK?

Drones, remote-controlled or preprogrammed, have been used extensively in battle to gather intelligence, direct artillery strikes and, to a lesser extent, drop explosives. There are many types. Sophisticated unmanned combat aerial vehicles that can launch missiles, such as the U.S.-made Predator, are better known.

The Shahed drones that Russia has rebranded as Geran-2 are far cruder: Packed with explosives, they can be preprogrammed with a target’s GPS coordinates. They are known as suicide drones because they nosedive into targets and explode on impact like a missile.

Drones like the Shaheds are called loitering munitions by the military because when used at short range, they can hover over an area and then hit a target on an operator’s command.

The drone has previously been used in Yemen and in a deadly oil tanker attack last year, said Behnam Ben Taleblu, senior fellow at the Washington-based think tank Foundation for Defense of Democracies.

And while its range is about 1,000 kilometers (621 miles), drone expert Samuel Bendett with the CNA think tank, said the Shahed is being used in Ukraine at much shorter ranges. That’s because its GPS guidance system — which is vulnerable to jamming — isn’t very robust.

Shaheds are known to have been controlled via radio under the Iranians. Whether Russia is capable of the same in Ukraine is unclear, though Ukrainians have reported seeing the drones change direction, suggesting at least some remote control.

Because they are cheap and plentiful, Russia has increasingly used Shaheds in Ukraine. Ukrainian President Volodymyr Zeleknskyy said last week that Russia had ordered 2,400 from Iran. Their use lets Russia avoid putting sophisticated aircraft and pilots at risk and save its limited stock of expensive long-range precision missiles.

In Monday’s attack on the Ukrainian capital of Kyiv, the city’s mayor, Vitali Klitschko, said 28 drones made up waves of successive attacks. Fired from a truck launcher in rapid succession, the drones can fly low and slow, better able to avoid radar detection.

They don’t technically swarm, Bendett noted. That kind of sophisticated drone technology exists — when multiple uncrewed aerial vehicles communicate with one another. Instead, the Shahed is simply launched in bunches in order to overwhelm defenses, particularly in civilian areas. “They know that most will not make it through,” he said.

Their power to terrorize exceeds their explosive might, however.

According to Mykola Bielieskov, a research fellow at Ukraine’s National Institute for Strategic Studies, the Shahed only carries a 40-kilogram (88-pound) explosive charge, which pales in comparison to the explosive force that a conventional missile’s 480-kilogram (1,050-pound) warhead can deliver at a much longer range.

“It is difficult to hit serious targets with such drones,” Bielieskov said.

But it’s also extremely difficult to shoot them down.

At a mere $20,000 apiece, the Shahed is only a tiny fraction of the cost of a full-size missile. For example, Russia’s Kalibr cruise missiles, which have seen widespread use in eight months of war, cost the Russian military about $1 million each.

At such a low cost, the Shahed has been used effectively to saturate targets, whether a fuel depot or infrastructure and utilities like power or water stations. Russia has used them with precision in combination with intelligence drones to attack Ukrainian artillery, said Bendett.

Despite its small size, the Shahed’s explosive charge appears powerful enough to do damage. In Monday’s attacks, one drone struck an operations center while another slammed into a residential building, ripping a large hole in it and collapsing at least three apartments, killing four people.

Bielieskov from Ukraine’s National Institute for Strategic Studies said Russia is now directing Shaheds at civilian rather than battlefield targets because Ukrainian forces have “learned how to fight them effectively,” intercepting a little more than half of them.

With no immediate end in sight, the conflict’s financial burden will weigh heavier on Moscow, which isn’t receiving billions in weapons transfers from Western nations like Ukraine is. As the conflict essentially becomes one of attrition — who can withstand that human, material and financial burden the longest — finding cheaper but still potent weapons will be key.

“Shahed-136 is a cheap version of a cruise missile, which Russia can’t produce fast,” said Bielieskov.

“This should raise alarm bells for Europe and the world,” he said.

Russian officials haven’t issued any data about the number of missiles fired during the conflict, but Ukraine’s defense minister recently alleged that Russia has used most of its high-precision missile arsenal.

A WAR OF NERVES

The incessant buzzing of the propeller-driven Shahed drones — dubbed “mopeds” and “lawnmowers” by combatants — can induce terror for anyone under its flight path because no one on the ground knows exactly when or where the weapon will strike.

Zelenskyy seized on the drones’ terror element, posting on social media: “The whole night, and the whole morning, the enemy terrorizes the civilian population.”

Bielieskov conceded that Shahed drone strikes stir fears that Ukraine’s air defenses are inadequate. But he said their use — even in large numbers — can’t reverse Ukraine’s battlefield gains.