Russian military secretly building up to threaten US? - The Horn News 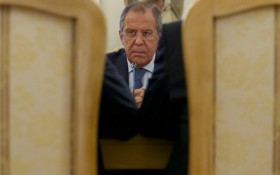 Is Russian President Vladimir Putin preparing his military to threaten US interests in the Middle East? According to reports from the Associated Press, Russian Foreign Minister Sergey Lavrov said Thursday that Russian aircraft flying into Syria are delivering military supplies and humanitarian aid, but he shed no light on what the U.S. suspects is a Russian military buildup at a Syrian airfield.

Russia has backed Syrian President Bashar Assad throughout the country’s 4½-year civil war, providing weapons and military experts to train Syria’s army to use them.

Lavrov on Thursday once again confirmed that Russia has military personnel in Syria for training purposes, but said nothing about reported deployments of additional Russian troops.

Russia has cast the arms supplies to Assad’s regime as part of international efforts to combat the Islamic State militant group. But the U.S. and its allies have seen Assad as the cause of the Syrian crisis, and Washington has warned Moscow against beefing up its presence.

President Vladimir Putin hasn’t ruled out a bigger role in Syria. Asked last week if Russia could deploy its troops to Syria, he said Russia was “looking at various options,” but it was too early to talk about it. His spokesman, Dmitry Peskov, said Thursday that nothing had changed and Putin’s comments still stood.

Peskov stressed that Russia sees Syrian government forces as the only ones capable of fighting IS and said it is Russia’s mission to support them.

Putin is expected to focus on the situation in Syria when he addresses the United Nations General Assembly at the end of the month.