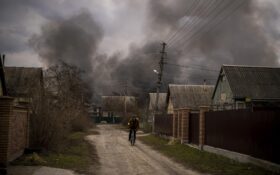 Russia’s military said Tuesday it would “fundamentally” cut back operations near Ukraine’s capital and a northern city, as talks brought a possible deal to end a grinding and brutal war into view.

Deputy Defense Minister Alexander Fomin said the move was meant to increase trust in the talks after several rounds of failed negotiations to halt the conflict that has devolved into a bloody campaign of attrition.

Critics call it a retreat after Russian forces failed to achieve their original military objective of seizing the Ukrainian capital and decapitating the country’s government.

Fomin said Moscow had decided to “fundamentally … cut back military activity in the direction of Kyiv and Chernihiv” to “increase mutual trust and create conditions for further negotiations.”

That appeared to be a goodwill gesture, but also comes as Russia’s troops have become bogged down and struggled to make major advances on the ground recently in the face of stiff Ukrainian resistance, thwarting Russian President Vladimir Putin’s aim of a quick military victory.

Ukraine’s military said it had noted withdrawals around Kyiv and Chernihiv, though the Pentagon said it could not corroborate Russia’s claim.

Earlier talks, held in person in Belarus or by video, failed to make progress on ending a month-long war that has killed tens of thousands and driven more than 10 million Ukrainians from their homes — including almost 4 million from their country.

But Fomin suggested there had been progress Tuesday, saying “negotiations on preparing an agreement on Ukraine’s neutrality and non-nuclear status, as well as on giving Ukraine security guarantees, are turning to practical matters.”

Ukraine’s team, meanwhile, set out a detailed framework for a future peace deal under which the country would remain neutral but its security would be guaranteed by a group of third countries, including the U.S., Britain, France, Turkey, China, and Poland, in an arrangement similar to NATO’s an “attack on one is an attack on all” principle.

Ukraine would also be willing to hold talks over a 15-year period on the future of the Crimean Peninsula, which was seized by Russia in 2014, with both countries agreeing not to use their armed forces to resolve the issue in the meantime.

Russia’s views on the proposals were not immediately clear.

Ahead of the talks, President Volodymyr Zelenskyy said his country was prepared to declare its neutrality. Moscow has demanded that the country drop any hope of joining the NATO alliance, which it sees as a threat. Zelenskyy also said he was open to compromise over the contested eastern region of Donbas — comments that might lend momentum to negotiations.

But even as the negotiators assembled in Istanbul, Russian forces hit an oil depot in western Ukraine and demolished a government building in the south, with several deaths.

A missile struck the oil depot late Monday, the second attack on oil facilities in a region that has been spared the worst of the fighting. On Tuesday morning, an explosion blasted a hole in a nine-story administration building in Mykolaiv, a southern port city that Russia has unsuccessfully tried to capture.

Seven people died in the missile attack and 22 were wounded, Zelenskyy said in an address to Danish lawmakers.

“It’s terrible. They waited for people to go to work” before striking the building, said regional governor Vitaliy Kim. “I overslept. I’m lucky.”

In the fighting that has devolved into a back-and-forth stalemate, Ukrainian forces retook Irpin, a key suburb northwest of the capital, Kyiv, Zelenskyy said late Monday. But he warned that Russian troops were regrouping to take the area back.

He also lashed out at Western countries, which he has repeatedly accused of not going far enough to punish Moscow with sanctions or support Ukraine. Western hesitancy in providing weapons makes those nations partially responsible for the destruction wrought, he said.

“Fear always makes you an accomplice,” he said.

As well as Irpin, Ukrainian forces also seized back control of Trostyanets, south of Sumy in the northeast, after weeks of Russian occupation that has left a landscape devastated by war.

It was unclear where the Russian troops went, under what circumstances they fled and whether the town will remain free of them.

Ukraine, meanwhile, said it would try to evacuate civilians from three southern cities on Tuesday. Deputy Prime Minister Iryna Vereshchuk said humanitarian corridors would run from heavily bombed Mariupol as well as Enerhodar and Melitopol. The latter two cities are under Russian control, but Vereshchuk didn’t say whether Moscow had agreed to the corridors.

Putin’s ground forces have become bogged down because of the stronger-than-expected Ukrainian resistance, combined with what Western officials say are Russian tactical missteps, poor morale, shortages of food, fuel, and cold weather gear, and other problems.

In response, Russia appeared to be concentrating more on Donbas, the predominantly Russian-speaking region where Moscow-backed rebels have been waging a separatist war for eight years, the official said.

Shoigu, whose few public appearances this month raised questions about his health and whereabouts, told top military officials that Russia had largely completed the first stage of its operation and was shifting to “the main goal — the liberation of Donbas.”

While that presents a possible face-saving exit strategy for Putin, it has also raised Ukrainian fears the Kremlin aims to split the country, forcing it to surrender a swath of its territory. Still, Zelenskyy’s comments that he was open to compromise on the region indicated a possible path for negotiations.