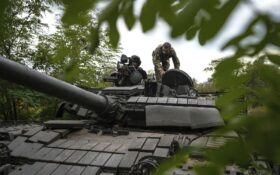 Ukrainian forces have broken through Moscow’s defenses in the strategic southern Kherson region, the Russian military acknowledged Monday, an achievement that delivers a sharp blow to one of the four areas in Ukraine that Russian President Vladimir Putin annexed last week.

Russia’s Defense Ministry spokesman Igor Konashenkov said in his daily briefing that “with superior tank units in the direction of Zolotaya Balka, Aleksandrovka, the enemy managed to penetrate into the depths of our defense.” Konashenkov added that “Russian troops have occupied a preprepared defensive line and continue to inflict massive fire damage” on Kyiv’s forces.

Kherson is one of the four regions illegally annexed by Moscow last week after a hasty “referendum” orchestrated by the Kremlin that Western nations have derided as a sham vote at gunpoint. Kherson has been one of the toughest battlefields for the Ukrainians, with slower progress when compared with Ukraine’s breakout offensive in the northeast around the country’s second-largest city of Kharkiv that began last month.

As the front lines shifted, the political theater in Moscow continued. Russia’s lower house of parliament on Monday quickly rubber-stamped an endorsement of the treaties for four regions of Ukraine to join Russia, a move that will be followed by the upper house on Tuesday.

Still, Russian officials and lawmakers gave conflicting signals on exactly what areas are being incorporated.

Kremlin spokesman Dmitry Peskov said before the vote Monday that two regions, Donetsk and Luhansk, are joining Russia with the same administrative borders that existed before a conflict erupted there in 2014 between pro-Russian separatists and Ukrainian forces. But he noted that the issue of the borders of the two other regions — Zaporizhzhia and Kherson — remains open.

“We will continue to discuss that with residents of those regions,” Peskov told reporters, without elaborating.

Putin’s land grab has threatened to push the conflict to a dangerous new level. It also prompted Ukraine to formally apply for fast-track NATO membership

On the battlefield, Ukrainian media outlets on Monday highlighted an image of Ukrainian troops displaying flags at a marker for the village of Khreshchenivka, which is in the same area of Kherson where Ukrainian troops apparently have broken through Russian lines.

Ukraine’s presidential official said Russian authorities have restricted people from leaving the city of Kherson, introducing special permits for those who want to go.

Ukraine has pressed its counteroffensive in the Kherson region since the summer, relentlessly pummeling Russian supply lines and making inroads into the areas west of the Dnieper River held by the Russians.

The Ukrainian military has successfully used U.S.-supplied HIMARS multiple rocket launchers to repeatedly hit the main bridge across the Dnieper in the city of Kherson and a dam that served as a second main crossing. It also has struck pontoon bridges that Russia has used to supply its troops on the western bank of the river.

Despite the successful strikes on supply lines, Ukrainian offensive operations in the south have been slower and less successful than the northeast, as the open terrain easily exposes attacking forces to Russian artillery fire and airstrikes. Still, Russian military bloggers close to Moscow have acknowledged that Ukraine has superior manpower, backed by tank units, in the area.

A Russian-installed official in the Kherson region, Kirill Stremousov, admitted in a video Monday morning that the Ukrainian forces “have broken through a little deeper.” However, he insisted that “everything is under control” and that Russia’s “defense system is working” in the region.

Russia attacked Ukrainian President Vladimir Zelenskyy’s hometown and other targets Sunday with suicide drones, and Ukraine took back full control of a strategic eastern city in a counteroffensive that has reshaped the war.

In his nightly address, Zelenskyy discussed the liberation of Lyman, which the Russians had used as a key logistics and front-line transport hub in the northeast. Lyman, which Ukraine recaptured by encircling Russian troops, is in the Donetsk region near the border with Luhansk.

“The story of the liberation of Lyman in the Donetsk region has now become the most popular in the media — but the successes of our soldiers are not limited to Lyman,” Zelenskyy said.

He also thanked troops from his hometown near Kherson.

“To the soldiers of the 129th Brigade of my native Kryvy Rih, who distinguished themselves with good results and liberated, in particular, Arkhanhelske and Myroliubivka,” he said.

Those two villages are in the same area where Ukrainian troops have been making advances. A photo emerged at the weekend showing Ukrainian forces operating southwest of Novovorontsovka on the banks of the Dnieper River.

Ukraine’s push to recapture territory in recent weeks has embarrassed the Kremlin and prompted rare domestic criticism of Putin’s war. Tens of thousands of Russian men have voted with their feet to leave Russia after Putin announced a military call-up on Sept. 21. Many have flown to Turkey, one of the few countries that has maintained air links with Russia. Others have fled in cars, creating long traffic jams at the Russian borders to Finland, Kazakhstan and Georgia, among others.

The criticism of Russia from at home and abroad has only spurred senior Russian officials to defend Putin’s actions even more strongly.

Addressing the Russian parliament on Monday, Russian Foreign Minister Sergey Lavrov accused the United States of rallying allies to counter Russia in Ukraine, just like, he said, Nazi Germany relied on the resources of most of Europe when it invaded the Soviet Union in 1941.

“The U.S. has mobilized practically all of the collective West to turn Ukraine into an instrument of war against Russia, just as Hitler mobilized military resources of most European nations to attack the Soviet Union,” Lavrov claimed.