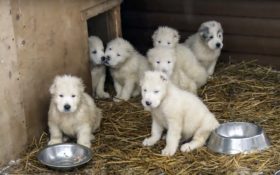 After a year of showing off its military might in Syria, the Defense Ministry has taken a softer approach in a one-minute video showing dozens of puppies sharing food and cuddling with each other. Older dogs are shown playing with unidentified officers.

In the Chinese calendar, 2018 is the year of the dog, so many Russians are using dogs in their holiday greetings this season.

Over 3,000 dogs are employed in the Russian armed forces.

Dogs from the 470th Dog Breeding Center outside Moscow are among the most decorated in Russia. The center won an international competition last summer against the canine forces of Belarus, Egypt, Iran and Uzbekistan.