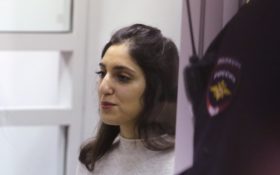 A Russian court has turned down an Israeli tourist’s appeal of her prison sentence for carrying a large amount of hashish.

Naama Issachar was arrested in April at Moscow’s Sheremetyevo Airport, where she was transferring flights while traveling from India to Israel.

Russian authorities said more than 9 grams of hashish were found in her luggage. Issachar was later sentenced to 7 1/2 years in prison.

On Thursday, she told the court she wasn’t provided with a translator or a lawyer after being detained. But the court let her sentence stand.