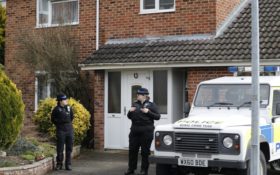 Russia’s foreign minister says Moscow will expel the same number of diplomats from the nations that have expelled Russian diplomats over the poisoning of an ex-Russian spy in Britain.

Sergey Lavrov said U.S. Ambassador Jon Huntsman has been summoned to the Foreign Ministry on Thursday, where he was given notice that Russia is responding quid pro quo to the U.S. decision to order 60 Russian diplomats out.

Lavrov said Moscow will also retaliate to the U.S. decision to shut the Russian consulate in Seattle by closing the U.S. consulate in St. Petersburg.

Lavrov said the same approach will be applied to other nations that expelled Russian diplomats this week.

Two dozen countries, including the U.S., many EU nations and NATO, have ordered more than 150 Russian diplomats out this week in a show of solidarity with Britain.

British health officials say the daughter of a Russian ex-spy has responded well to treatment and is no longer in critical condition after a nerve-agent attack.

Salisbury NHS Trust, which oversees the hospital where the pair are being treated, says 33-year-old Yulia is “improving rapidly and is no longer in a critical condition. Her condition is now stable.”

Yulia Skripal and her father, an ex-spy, were found unconscious in the English city of Salisbury on March 4.

British authorities say they were poisoned with a military-grade nerve agent and have blamed Russia. Moscow denies involvement in the attack, which has sparked a diplomatic crisis between Russia and the West.