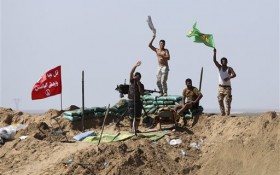 Russia on Monday warned the United States that it will start responding unilaterally to cease-fire violations in Syria if the U.S. refuses to coordinate rules of engagement against violators. A U.S. official contended the issues were being discussed “in a constructive manner.”

The Russian military has accused the U.S. of dragging its feet on responding to Moscow’s proposals on rules for joint monitoring of the Syria cease-fire and response to violations. It said that further delays are leading to civilian casualties.

Lt. Gen. Sergei Rudskoi of the Russian General Staff said in a statement on Monday that if the U.S. fails to respond to its proposals on a joint response, the Russian military will have to start unilaterally using force against those who break the cease-fire, starting Tuesday.

The Russian Foreign Ministry issued a separate but similar statement.

But in a statement e-mailed to The Associated Press, a U.S. official in Geneva said: “We have seen the media reports on alleged Russian concerns over cease-fire violations. Whoever is making such statements must be misinformed, because these issues have been discussed at length already, and continue to be discussed, in a constructive manner.”

The official demanded anonymity because he was not authorized to speak publicly on the matter.

The cease-fire that began on Feb. 27, brokered by Russia and the U.S., has helped significantly reduce hostilities for the first time during the five-year conflict that has killed a quarter-million and turned millions into refugees. The Islamic State group and the al-Qaida-linked Nusra Front have been excluded from the truce.

Russian President Vladimir Putin last week recalled some Russian warplanes from Syria, but said the action against those groups will continue.