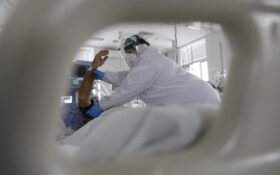 Russia is reporting a record daily count of new coronavirus infections, a tenfold spike from a month ago as the highly contagious omicron variant spreads through the country.

The figure of 189,071 new infections released by the state coronavirus task force on Sunday was about 2,800 cases more than the previous day and continued a surge that began in mid-January, when daily new cases were around 17,000.

Although the number of infections has increased dramatically in recent weeks, the task force reported that daily deaths from COVID-19 are holding steady or marginally declining: 661 more deaths were recorded Sunday, compared with 796 on Jan. 6.

For the entire course of the pandemic, the task force has reported 12.8 million infections and 335,414 deaths, the highest death toll by far in Europe.

Despite the soaring infections, Russian President Vladimir Putin told Russia’s top business association last week that authorities are not planning any lockdowns or other additional restrictions. Moreover, the government lifted the seven-day self-isolation restrictions for those who come into contact with COVID-19 patients.

Russia has had only one lockdown, for six weeks in 2020, and in October 2021 many people were ordered to stay off work for about a week. But beside that, life in most of the country remained largely normal.

In recent weeks, a growing number of Russian regions have started introducing restrictions for those under 18, as officials noted that the current surge is affecting children much more than the previous ones. In many areas, schools have either switched to remote learning or extended holidays for students. In St. Petersburg, Russia’s second-largest city, minors have been temporarily barred from most public places.

Russia started vaccinating children aged 12-17 only last month with the domestically developed Sputnik M jab, which is the same composition as its Sputnik V but contains a smaller dose. According to media reports and social media users, only small amounts of the vaccine for teenagers have been made available.

Only about half of Russia’s 146 million people have been vaccinated so far, even though the country was among the first in the world to roll out COVID-19 shots.