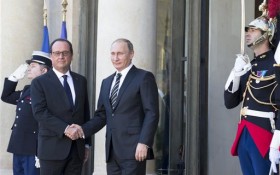 The long-awaited summit in Paris on Friday was overshadowed by international concerns about Russia’s military intervention in Syria this week.

Putin met with Ukrainian President Petro Poroshenko, French President Francois Hollande and German Chancellor Angela Merkel for the first time since they worked out a peace deal in Minsk in February.

That accord has been troubled, but there have been signs of progress in recent weeks, including a breakthrough agreement this week on withdrawing tanks and many weapons.

The conflict between government forces and Russia-backed separatists has killed more than 8,000 and displaced 2 million since April 2014.

The Ukrainian delegation is hoping for progress on the status of the eastern Donbass region and progress on a dispute over regional elections planned Oct. 25 and other elections the rebels are proposing Oct. 18 and Nov. 1.

French President Francois Hollande, in proposing the meeting last month, praised recent progress around the Minsk plan. If that continues, he said, “then I will argue for lifting the sanctions.” EU sanctions and a subsequent Russian embargo have hurt many European companies.

International observers monitoring the cease-fire in eastern Ukraine have reported over the past few months that heavy weapons have been moved around on both sides of the front line in violation of the February agreement. Just last week, they spotted a Buratino heavy multiple rocket launch system at a rebel training area near the town of Kruhlyk in the separatist-controlled Luhansk region.

“I believe it is the first time we’ve seen this multiple rocket launch system there,” Michael Bociurkiw, spokesman for the OSCE monitoring mission, told The Associated Press. “Of course it’s very destructive. It’s very indiscriminate in the way it causes damage to the area it hits.”

Ukraine does not have the Buratino in its arsenal and believes it could only have been supplied to the rebels by Russia, Ukrainian General Staff spokesman Vladislav Seleznyov told the AP. Russia denies arming the separatists.

The OSCE monitors cannot determine the origin of the Buratino, their spokesman said. Their concern is that, as with all heavy weaponry, its presence close to the front line raises the risk of escalation.

Overall, though, Bociurkiw was optimistic about the peace process, noting that the latest truce has largely held since it began on Sept. 1. “We are now into an unprecedented period … of unprecedented calm,” he said.