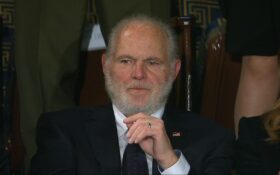 To honor the memory of the late, great Rush, The Horn News is sharing some of the greatest highlights — and predictions — of the man who remade American politics and media.

This is what it's all about. 🙏🙏 pic.twitter.com/nn2dkff15U

There’s also some new Rush that just came out… sort of.

A compilation of radio commentary by the late Rush, from his early years on the air to his decades as a bombastic and influential voice in conservative politics, was published Oct. 25, 2022.

“This book is written in appreciation of the millions of listeners who Rush considered to be his extended family and ‘the greatest audience in the world,’” Threshold’s announcement read.

Limbaugh died of lung cancer in 2021 at age 70. In his lifetime, he published the bestsellers “The Way Things Ought to Be” and “See, I Told You So.”