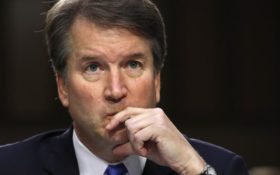 And it’s a betrayal of conservative principles.

The recent rulings have many conservatives very nervous, Limbaugh said — and with good reason.

So far, he’s turning out to be liberal.

“Brett Kavanaugh has been signing with the leftists on the Supreme Court,” Limbaugh warned Monday. “He’s been siding with the liberal majority on, I forget, but two or three previous cases, and he did it again today.”

“Justice Brett Kavanaugh sided with the liberal wing of the Supreme Court on Monday, writing an opinion against Apple that ruled the tech company can be sued over high prices in their App Store,” the conservative radio host said.

Limbaugh later said: “Kavanaugh’s stance with the liberal wing of the court was striking. President Trump’s second nominee to the high court faced fierce Democratic opposition during his confirmation process, over sexual misconduct… Justice Neil Gorsuch, Trump’s other pick, wrote the dissent for four conservative justices in the Apple case. The consumers’ complaint against Apple is the kind of case earlier high court rulings said was not allowed under federal laws that prohibit unfair control of a market, Gorsuch wrote.”

It’s the opposite of what Kavanaugh was supposed to be, Limbaugh lamented.

He was supposed to be more conservative that Gorsuch. So far that seems to not be the case — and he has a theory why.

“You go back to the Federalist Society, Kavanaugh was the best of them all,” Limbaugh said. “Better than Gorsuch, more conservative, more pure — this, that, and the other thing. But this is the second or third time now that he has aligned with the leftists.”

“I’ll tell you what I think: I think all that [Christine] Blasey Ford stuff worked!” he said.

Is Brett Kavanaugh giving in to liberal media pressure?