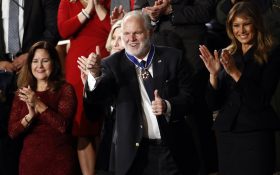 You didn’t have to like or even listen to Rush Limbaugh to be affected by what he did while he was alive.

Conservative talk radio wasn’t a genre before him. Without Limbaugh, it’s hard to imagine a Fox News Channel, or a President Donald Trump, or a media landscape defined by shouters of all stripes that both reflect and influence a state of political gridlock.

To his fans, Limbaugh’s death from lung cancer in 2021 at the age of 70 was an occasion for deep mourning. For his foes, it was good riddance. Somewhere, Rush could surely appreciate it.

He left a legacy — and it’s so powerful he’s still grabbing headlines in the Wall Street Journal a year after his death.

According to the Journal, Limbaugh’s longtime Palm Beach home has been listed for sale for a staggering $150 to $175 million.

The roughly 2.7-acre waterfront property, located on Palm Beach’s tony North Ocean Boulevard, includes multiple structures, including a large main house built in West Indies style, according to public records and people familiar with the property. The property has roughly 250 feet of ocean frontage and direct access to the beach, records show.

“He was the most important individual media figure of the last four decades,” said Ian Reifowitz, professor of historical studies at the State University of New York

But the idea of conservative talk radio didn’t take hold until Limbaugh, after bouncing through DJ jobs in Pittsburgh, Kansas City, and Sacramento, went national from a perch at New York’s WABC in 1988, said Michael Harrison, publisher of Talkers magazine.

Limbaugh was a sensation among people who liked to tweak liberals, outraging with political incorrectness. Before Limbaugh, only 30 or 40 stations did “talk radio,” and many weren’t political, Harrison said. Now there are thousands.

Even at the end, Limbaugh led the field. He reached an estimated 15.5 million people each week and lost in the ratings for three months only once in some three decades, to advice host Laura Schlessinger, Harrison said. Bumper stickers proclaimed, “Rush is Right.”

“There is no talk radio as we know it without Rush Limbaugh. It just doesn’t exist,” said Sean Hannity, who has 15 million radio listeners beyond his Fox News Channel show. “And I’d even make the argument in many ways: there’s no Fox News or even some of these other opinionated cable networks.”

If his former home sells for the $150 million estimate, he’ll make history one last time: His mansion would be one of hte most expensive ever sold in the luxurious Palm Beach.

The property is currently owned by a trust that is tied to Limbaugh’s beloved widow, Kathryn Adams Limbaugh.