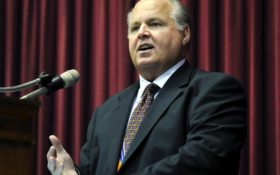 The Democrats have a clear path to victory.

…but they’re going to blow it.

Limbaugh says that former Vice President Joe Biden can beat President Donald Trump in a one-on-one matchup. Biden is the Democrats best hope, Limbaugh said, because he can challenge Trump on certain strengths.

The polling data backs up Limbaugh’s predictions. According to Morning Consult, Biden has a staggering 8-point lead in a hypothetical head-to-head matchup against Trump.

But the Democratic voters are too short-sighted.

“Here’s the thing: Joe Biden is probably the best chance they’ve got, and he doesn’t have a chance,” Limbaugh said during an interview on “The Story with Martha MacCallum.”

Limbaugh predicted that the far-left will sabotage their own party’s chances at the White House because of identity politics.

“Joe Biden? And crazy Bernie? And mayor Pete? Three white guys, two of them are brontosauruses from ‘Jurassic Park,’ and that isn’t going to sit well with the rest of this party, which has gone so far left,” Limbaugh said.

He also questioned Biden’s commitment to a grueling presidential primary.

“I don’t know how badly he really wants this,” Limbaugh said. “And you have to really want this if you are going to have any chance of winning it.”

Limbaugh went on to slam many of the far-left party platforms, like Sen. Elizabeth Warren, D-Mass., and her proposal to eliminate student loan debts.

“They just want to have their hands out and vote for whoever is going to give them the most,” Limbaugh said. “What a way to ruin a life.”