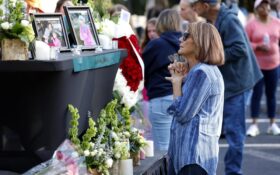 Her husband, Tom Karnatz, said she died 1.9 miles short of her 7-mile goal for that day. Now, runners across the globe are finishing the final leg of the run Karnatz never got to complete.

Organizing under the hashtag #RunforSue, hundreds of runners are sharing photos of their routes — often 1.9 miles (3 kilometers) to complete her run, 5.1 miles (8.2 kilometers) to mark the distance she covered or 7 miles (11.2 kilometers) to match her goal — on Twitter, Facebook and Instagram to show the Karnatz family how many she inspired. Runners as far as Panama, Australia and Ireland have already dedicated their daily runs to her.

The teen who killed Karnatz and four others was arrested hours after the shooting, police said. He was hospitalized after his arrest and remains in critical condition.

The victims, ranging in age from 16 to their late 50s, died while going about their everyday routines, friends and authorities have said. Karnatz, 49, had just left home for a run down one of her favorite paths, her husband said.

A four-time Boston Marathon finisher and beloved member of several local running groups, Karnatz is remembered by her friends and family as “a beacon of strength,” the “rock of her family” and “a role model” for fellow moms. She worked as a school psychologist before pausing to homeschool her three sons, ages 14, 13 and 10. The boys often joined their parents on short runs, which their friends described as a family affair.

“She was a very loving wife and amazing mother to our three sons,” her husband told The Associated Press through tears when he answered his door Friday morning. “We’re absolutely heartbroken and miss her dearly.”

Under a basketball hoop in the family’s driveway, a silver minivan and a Toyota Camry display matching 26.2 stickers — signifying the mileage of a marathon. The minivan’s license plate reads simply: “RUNNR.”

The #RunforSue posts — some from friends and many more from complete strangers — have been a bright spot in an otherwise devastating week.

“I’m amazed at all the support,” Tom Karnatz wrote Sunday on Facebook after running 1.9 miles with his sons, niece and brother.

The Karnatzes met in 2004 at a gathering of the North Carolina Roadrunners Club and stayed involved with the organization for almost 20 years, said Jack Threadgill, the club president.

Just before Threadgill pinned on his red and white bib for Sunday’s Bull City Race Fest, a half marathon in nearby Durham, the Cary resident grabbed a black marker and inscribed his bib with “SBK” for Susan Butler Karnatz.

He spent the weekend recalling fond memories of Karnatz, like when they ran with her kids in the club’s February social run from one Snoopy’s Hot Dogs to another.

“It’s a Raleigh institution, ” he quipped — a momentary break from his somber tone.

The club will gather for a pre-planned race at the end of October, where members will have the chance to write condolence cards and donate to the family’s charities of choice — an animal rescue and a children’s literacy project. An annual memorial run will likely be organized.

Karissa McDonough had been close friends with Karnatz for about six years, and the two ran the Boston Marathon together in 2019. After the shooting, the mother from Waterbury Center, Vermont, carefully explained the tragedy to her 14-year-old daughter Eireann before asking if she wanted to come along on a run to honor her late friend.

“Her eyes lit up and she was like, ‘It’s meaningful to Mom, so yes, for sure I want to do it,’” McDonough said.

Blasting “the ultimate pump-up song” — Metallica’s “Master of Puppets” — out the car windows, Eireann strapped on her rollerblades and a skull helmet as her mom drove them to the trailhead. They made their way up the mountain to a ski resort, passing horseback riders and fellow runners before stopping to reflect at a covered bridge.

As a fellow mother of three, McDonough, 47, said she always looked to Karnatz as a role model. Even when they were far apart, Karnatz filled her days with laughter and constant encouragement after McDonough’s husband died of an illness in January. Now, McDonough said she is devastated that Tom Karnatz and his sons will have to experience a similar pain.

“When I met her, it was like meeting myself,” she said of her friend. “We became so close because we were living the same lives, just, you know, a thousand miles away.”

Other runners, like Tom Blennerhassett of Kildare, Ireland, had never met Karnatz but paid tribute from afar. After seeing a friend in North Carolina, post about the shootings on Instagram, Blennerhassett said he realized “it really struck a chord.” His community, he said, is still recovering from the killing earlier this year of a 23-year-old female primary school teacher who was out running along a canal.

Blennerhassett, who has been training for the upcoming Dublin Marathon, ran a 5.1-mile loop Sunday in Karnatz’s honor along some busy roads and through open plains while listening to his soft rock playlist — complete with U2, Tom Petty and Bruce Springsteen songs.

“Both a mental and physical recovery run of sorts,” he said. “It was nice to reflect about somebody like that losing their life so senselessly while just out for a run, the things that we take for granted every day.”