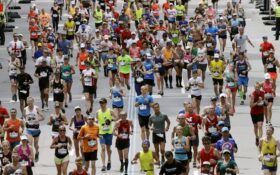 Distance running, traditionally one of the world’s most genteel sports, has been roiled by an ugly mid-pandemic squabble over who should get a shot at a coveted Boston Marathon medal.

Rival camps in the running world began snapping at each other’s heels this week. It began after the Boston Athletic Association, which still hopes to hold a truncated in-person edition of the planet’s most prestigious footrace in October, said it will award medals to up to 70,000 athletes if they go the distance wherever they are.

Practically within minutes of the BAA’s announcement greatly expanding its virtual version of the race, a boisterous social media maelstrom ensued.

On one side: Runners who’ve spent years training to qualify to run the real thing, including some who complain that mailing medals to people who run the 26.2 miles (42.2 kilometers) in Dallas or Denver will cheapen the iconic Boston experience.

“A dagger through the heart to someone who has worked hard to finally earn the qualifying standard,” one runner groused on Twitter.

On the other: Pretty much everyone else, including the plodding masses and runners who raise millions for charities, who counter that anything that helps the 125-year-old marathon survive the COVID-19 crisis is worthwhile.

“A virtual Boston race that invites everyone is a reason to celebrate,” said Maria Arana, a marathoner and coach in Phoenix. “It in no way takes away from my personal Boston Marathon experience or anyone else’s.”

The bickering seems to have caught many off-guard, if only because road racing has long had a reputation as a kind and egalitarian sport.

It’s one of the few disciplines where ordinary amateurs compete in real time on the same course as elite professionals, and where trash-talking is rare. As four-time Boston champion Bill Rodgers famously said: “Running is a sport where everyone gets along.”

It also comes as the Boston Marathon and other big-city races are struggling to stay afloat during the pandemic and looking for creative ways to keep runners engaged online.

The BAA put on a virtual version of the marathon last year, after the coronavirus pandemic forced it to first postpone its usual April running to September, and then cancel in-person racing altogether.

But that was limited to athletes who had already qualified to race or had registered as charity runners. This time, the first 70,000 people aged 18 or older who sign up and pay a $70 fee will be able to earn a finisher’s medal simply by covering the classic distance wherever they happen to be. They don’t even need to run — they can walk.

“For the first time in our history, most everyone will have the opportunity to earn a Unicorn finisher’s medal,” BAA president and CEO Tom Grilk said in a statement.

Grilk said the in-person race, if it comes off as scheduled on Oct. 11, will have a reduced field to help keep athletes and spectators safe. Typically the Boston field is capped at around 30,000; the BAA hasn’t said how much smaller it will be this autumn.

Josh Sitzer, a San Francisco runner who’s qualified for the Boston Marathon three times, initially was among those who trashed the idea of giving out 70,000 medals as “a blatant money grab.”

“Respect yourself and the game. Don’t do Boston unless you earn it,” he tweeted. Then he had a change of heart, tweeting: “I was wrong. It’s not the same as the actual Boston Marathon, and it doesn’t devalue” the experience of those who meet strict qualifying standards for a chance to line up in Hopkinton, Massachusetts.

It’s been a bad look, acknowledges Erin Strout, who covers the sport for WomensRunning.com.

“If there ever was a time to put our elitism and cynicism aside, it’s now,” she wrote in an opinion piece. “Let’s welcome each other in, cheer each other on, and seize the opportunity to bring back running bigger, better, and more inclusive than it was before.”