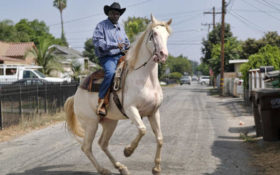 This bull was seeing red — and endangering a city.

So couple of cowboys from a rodeo competition, each armed with a lasso, set out to recapture the escaped bull that was running wild in a South Dakota city.

Authorities say the bull got loose Sunday when the owner was loading him into a trailer at the Central States Fairgrounds in Rapid City. The bull bolted along a bike path, through Memorial Park and Rapid Creek, and stopped at the Executive Golf Course.

KOTA-TV reports that police say even though the bull was tired he was still considered dangerous, especially in a residential area.

Police summoned some cowboys from the Sutton Ranch Rodeo competition at the civic center and they were able to rope the bull and get him back to the trailer.