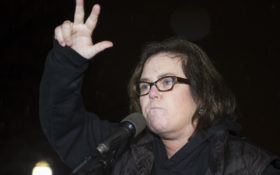 Just months after Rosie O’Donnell drew criticism for encouraging people to play a game where they killed President Donald Trump by pushing him off a cliff, the liberal celebrities behavior is making headlines again.

Trump isn’t the only person controversial celebrity Rosie O’Donnell is feuding with, too. It seems even O’Donnell’s family isn’t safe from her nasty attacks.

Last week, O’Donnell became furious with her 20-year-old estranged daughter, Chelsea Alliegro, over a magazine interview — and it caused the liberal comedian to suffer a mortifying public meltdown on Twitter.

O’Donnell accused Alliegro of attempting to cash in on the suicide of the liberal celebrities ex-wife, Michelle Round. The tweets started after Alliegro told The Daily Mail in an interview that she was pregnant and that O’Donnell “will not have a part in this child’s life”.

not words I would use to describe u

The tweets are referring to O’Donnell and ex-wife four-year-old daughter, Dakota.

O’Donnell followed up her first tweets with the letter Alliegro wrote when she first left home and the two became estranged — and then clarified in a reply what her intention was.

she's 20
not a teen
she is married
and pregnant

O’Donnell then began a bizarre series of attacks that left observers cringing, accusing her daughter of being in an abusive relationship and demanding she stop giving interviews.

did u hate me this day? last year – at the apple store – was this b4 nick was arrested for beating u up? same same pic.twitter.com/nCJFdawJ3z

u want no part of me

https://t.co/W5t4zg65RH
we have been here before Chelsea
u wanna go a few rounds in public
seems so

Additionally, O’Donnell has been attacking The Daily Mail reporter that wrote the interview with Alliegro.

She tweeted a series of threats at the reporter, Martin Gould, saying she “can’t wait” to meet him and called him a “predatory, old creepy man” that paid her “ill daughter” for the interviews.

Why the public meltdown? O’Donnell claims she had no other choice.