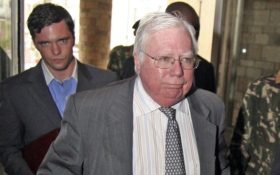 An associate of Trump confidant Roger Stone said Monday that he is rejecting a plea offer in the special counsel’s Russia investigation.

In an email to The Associated Press, Jerome Corsi, a conservative author who has pushed conspiracy theories, said he planned to reject a potential plea deal with prosecutors.

He did not elaborate, but in earlier interviews with other news organizations, he said he had been offered a chance to plead guilty to a single count of lying to investigators. He said he planned to reject that offer because it would force him to admit to willfully lying, which he insisted he did not do.

“They can put me in prison the rest of my life,” Corsi told CNN. “I am not going to sign a lie.”

American intelligence agencies have said Russia was the source of the hacked material released by the anti-secrecy website WikiLeaks in the closing weeks of the 2016 presidential election. Those emails included messages from John Podesta, the chairman of Democrat Hillary Clinton’s campaign.

Mueller is trying to determine whether Stone and other associates of President Donald Trump had advance knowledge of WikiLeaks’ plans.

ABC News reported that Corsi had provided copies of a draft plea agreement in which he would have admitted to lying about an email about an associate’s “request to get in touch with an organization that he understood to be in possession of stolen emails and other documents pertaining to the 2016 U.S. presidential election.”

Corsi told the AP last week that he was in plea negotiations with Mueller’s office and had earlier said on his YouTube show that he expected to be indicted for making false statements.

Corsi has said he cooperated with the probe for about two months after he received a subpoena in August. As part of that cooperation, he turned over two computers and a cell phone and provided the FBI access to his email accounts and tweets.

Stone has denied being a conduit for WikiLeaks and has not been charged. He has said he did not have advance knowledge of the source, content or exact timing of the WikiLeaks release.

In an email Monday, Stone said Corsi was being “harassed by the Special Counsel, not for lying, but for refusing to lie.”

He added, “As Dr. Corsi has said I have no knowledge of any contact or Communication with Julian Assange or Wikileaks by Dr. Corsi.”