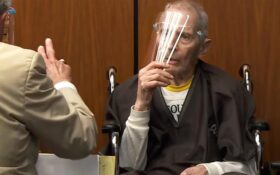 The bitterly fought murder trial of Robert Durst stretched over the better part of two years. His sentencing will be comparatively brief and could lack the fireworks that erupted between the lead prosecutor and defense lawyer.

The eccentric New York real estate heir faces a mandatory term of life in prison without parole Thursday for the first-degree murder of his best friend, Susan Berman.

“Now that the jury has found whodunnit, the punishment is quite clear,” Loyola Law School Professor Laurie Levenson said. “I’m not sure there’s a lot more left for (the prosecutor) to say.”

Durst, 78, was convicted last month in Los Angeles Superior Court of shooting Berman point-blank in the back of the head in her Los Angeles home just before Christmas 2000.

The trial began in March 2020 and was adjourned for 14 months as the coronavirus pandemic swept the U.S. and courts were closed. It resumed in May with the jury that reached its verdict Sept. 17.

Berman, the daughter of a Las Vegas mobster, was Durst’s longtime confidante who was preparing to tell police she provided a phony alibi for him after his wife vanished in New York in 1982.

But following his conviction in Berman’s death, which relied on evidence that he killed his wife, a New York prosecutor is prepared now to seek charges against him in her death, a person familiar with the matter told The Associated Press on condition of anonymity.

Durst testified in the LA case, denying he killed his wife or Berman, but he said he’d lie if he had done so.

Kathie McCormack Durst’s family had hoped to present statements to the court Thursday about their loss, but prosecutors denied the request, according to emails sent to their lawyer.

Attorney Robert Abrams said the McCormack family was disappointed, and he was outraged. He said family members would not attend the sentencing.

“The family is not going to go travel 3,000 miles to be a prop in some Hollywood production and sit there and not be able to make their victim impact statements,” Abrams said. “This is not some movie where it’s gross spectacle. This is their lives, and they’ve suffered for 40 years.”

A spokesman for the district attorney’s office did not return a message seeking comment.

Levenson said it was questionable whether Kathie Durst was a victim in the Los Angeles case because Robert Durst wasn’t charged with her killing. Allowing her siblings to speak at sentencing would create another issue for an appeal.

Defense lawyers plan to argue for a new trial Thursday, saying there was insufficient evidence to prove the case and listing 15 ways the judge erred.

The motion is mainly to preserve issues for appeal and likely to fail, Levenson said, though some of their claims could get a higher court’s attention.

The defense said Judge Mark Windham should have declared a mistrial when the jury was sent home and the case adjourned. They said the length of the delay was unprecedented.

Many of the other issues revolve around admission of evidence, such as allowing prosecutors to present testimony that Durst killed a neighbor in Galveston, Texas, in 2001 and chopped up his body and tossed the parts out to sea. Durst was acquitted of murder after testifying that Morris Black pulled a gun on him and was killed in a struggle for the weapon.

They also objected to testimony and exhibits that showed when Durst was arrested in New Orleans in 2015, he had a mask, fake identification, drugs, $40,000 cash and a loaded handgun in his hotel room.

They also objected to showing jurors a feature film based on Durst’s life and the six-part documentary, “The Jinx: The Life and Crimes of Robert Durst.”

To limit the number of appellate issues, prosecutors may be more restrained in their sentencing presentation, Levenson said, particularly when the prison term is already set.

Deputy District Attorney John Lewin was asked by a reporter after the conviction what he had to say to Durst.

Lewin, who was aggressive and frequently scrapped with defense lawyer Dick DeGuerin over the six years it took from arrest to conviction, initially said he didn’t have anything to say to the man he had pursued for years.

Then he called Durst a “narcissistic psychopath” who “killed his wife and … had to keep killing to cover it up.”