RNC fundraising surprasses DNC by... how much!? - The Horn News 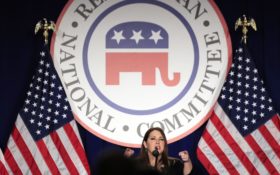 According to The Washington Examiner, the RNC hit another record-breaking month by pulling in $14.2 million, making this the first month ever in history for the committee to receive that much money in a nonpresidential election year.

The amount raised by the RNC in July was more than the committee raised in by 2010 and 2014 combined.

While the DNC has not yet released their July numbers, in May and June they only raised $6 million and $8 million — no where near what the RNC has raised.

“We’ve built the biggest field program we’ve ever had to defend our majorities in the House and Senate. History might be against us, but we’re making sure every voter knows we’re the party of results. All the Democrats have is resistance,” McDaniel said in a statement.

Unlike the RNC, the DNC is experiencing cash problems. The committee suffered a major blow in Georgia when they lost a special election for a House seat last June — and that lost ultimately cost them $40 million.

The RNC on the other hand has $42 million on hand and has no debt.

Democrats should tread likely because if these figures mean anything — it could be proof that they will be suffering a major blow in November.