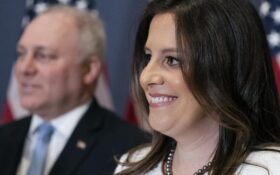 U.S. Rep. Elise Stefanik, whose loyalty to former president Donald Trump won her a leadership post in the House Republican caucus, announced on Twitter that she is expecting her first child.

The fourth-term Congress member from upstate New York tweeted Saturday, “We are absolutely overjoyed to announce that our small family of 2 will soon be 3! We’re excited to share that we are expecting a baby this fall & we cannot wait to meet our precious bundle of joy.”

Stefanik, 36, was first elected to Congress in 2014. She was elevated to the No. 3 position in the Republican caucus last month when party members ousted Wyoming Rep. Liz Cheney from the position for pushing back against Trump’s controversial claims that voting fraud cost him the 2020 presidential election.

After initially distancing herself from Trump, Stefanik has become one of the former president’s fiercest defenders in the House