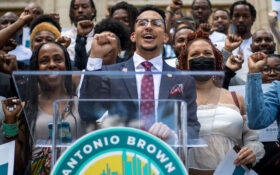 Atlanta mayoral candidate and city councilman Antonio Brown, a rising Democratic star and proponent of the “Defund the Police” movement, had been meeting with a local community leader when the unthinkable happened.

A group of young people reportedly stole and drove off with his Mercedes.

According to reports, a group of kids, of which the youngest was only 6 or 7-years-old, stole the councilman’s car right before his eyes.

Brown told Fox 5 Atlanta that he was speaking to community leader Ben Norman when the incident occurred.

According to the initial report, Brown’s car — which is a keyless start — seems to be what allowed the kids to turn the car back on and drive off in the vehicle.

Brown says he noticed the group of kids prior, walking around a store nearby before they attacked.

“… they had plans, they knew what they were going to do,” Brown told Atlanta Fox 5.

He goes on to explain how he and Norman struggled with the group of kids to regain control of the car.

“He hit the gas and he pulled out, peeled out, and took off.”

Ultimately, Brown says he gave up because it would’ve led to serious consequences.

“As he started to speed up, and I knew that if I had not let go, I knew I probably could have killed myself because he was going so fast, I would have started to tumble,” he added. “And I would have hurt him.”

The New York Post reported that Brown filed a report with the Atlanta Police Department.

The very same department he wants to defund…