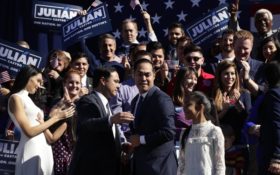 Democrat Julian Castro stood in front of screaming fans at a rally in San Antonio and announced his bid for the 2020 presidency. In doing so, he called Donald Trump a “failed leader.”

Castro going to have his hands full explaining how he could attack the same man he had no problem doing business with just a few years ago.

Politico reports that in 2002, the then-city councilman of San Antonio voted in favor of granting a $600,000 taxpayer subsidy to hold Trump’s Miss USA pageant in town. The festivities included quality amenities such as discounted hotel rooms for those involved, as well as food and beverage services.

It brought in a lot of tax dollars to the city — and put Trump and Castro on the same team. In the fiery, partisan Democratic dogfight heading towards 2020, that makes Castro virtually untouchable.

Castro claimed that the commander-in-chief had duped him somehow, and robbed taxpayers of their money. If Castro had trouble negotiating that, a moment where his taxpayers’ money is on the line, how does he expect to negotiate with anyone in the White House?

The former mayor has been torn to shreds by the usually friendly mainstream media for his infancy in the political world. According to Vox his five-term position as mayor of San Antonio was merely part-time.

…this is who is supposed to lead the country?

Michael Ahrens, the spokesman for the Republican National Committee, was sharp in his complete rebuke of Castro as a serious contender:

Julián Castro has made history by becoming one of the biggest lightweights to ever run for president.

He was a weak mayor who couldn’t even handle being HUD secretary.

This is obviously just another desperate attempt to become someone else’s running mate.

Little did Castro know that he put himself on a long list of political figures opposing Trump, who’ve all done business with or begged for money when the cause suited them. A prime example of this was Hillary Clinton, who after all her harsh criticism of the president leading up to the 2016 election, gladly took his campaign donations in past years.

Clinton even came to Trump’s wedding — and was later soundly beaten by the president.

Critics say Castro’s behavior is just another hypocritical example pf the Democratic Party saying one thing… but doing another.

Embarrassing — and NOT the start to 2020 the Democrats were looking for.