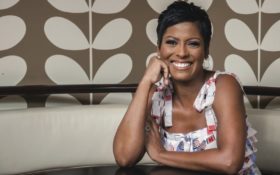 ABC News star Tamron Hall is under fire after a Daily Mail report surfaced that the talk show host used to “facilitate” drug deals when she was 19-years-old.

According to the report, Hall confessed to her past as a cocaine dealer during a live taping of her show with the same name, “Tamron Hall,” on Tuesday.

Her admission left the crowd stunned.

And her producers were reportedly scrambling for damage control.

According to production insiders, ABC bosses ultimately decided to remove the cocaine dealer confession from her show entirely.

Hall denies any wrongdoing, and her defenders say the initial reports were taken out of context.

She reached out to The Daily Mail in a statement, claiming that she never “dealt drugs,” but was instead simply having an open conversation about “mistakes made” in the past with guest Topeka Sam, a prison rights advocate.

“I never dealt drugs,” Hall said in a statement. “I am now nearly 50 years old and was reflecting on a bad judgement call that could have turned worse. I say but for the grace of God, there go I. It was part of an open and honest conversation about women, incarceration and mistakes made.

“For legal reasons a portion of that segment was edited from the show. I hope my show can be a forum for sharing stories without shame or judgement…”

Hall was a former NBC host of the “Today” show. She exited the network for good amid a staff shakeup in 2017, when Megyn Kelly was given her own show.