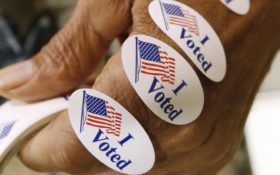 A new online video shows how Democrats and their allies plan to shamelessly break the law this year to beat back President Donald Trump, by hook or by crook.

The YouTube video shows Illinois union leader Totsy Bailey, president of Local 439 Steamfitters/Pipefitters Union, telling his members to vote for the Democrats’ candidate for governor, J.B. Pritzker – more than once.

“He won’t win if we do not get out and vote,” Bailey told a rally in Caseyville last Saturday. “We need to early vote” to defeat Republican Gov. Bruce Rauner.

“Like I say, we can play East St. Louis route,” he said – talking about an area known for its rampant lawbreaking and shady elections.

“Vote early, vote often, whatever you can get away with,” he told the union.

Bailey realized he’d crossed the line legally – but he figured he could get away with it if the Democrats win this fall.

“I shouldn’t say that, but I really don’t care,” he said.

The Democrats’ have such a feverish case of “Trump Derangement Syndrome” that it makes just about anything seem acceptable, including breaking the law – and that’s exactly what’s happening coast to coast.

The media laughed at Trump in January, when he said he’d seen “substantial evidence of voter fraud.”

But the liberal media won’t tell you that voter fraud has been cropping up in every section of the United States.

Some of the fraudulent voters are non-citizens — 19 foreigners voted in the 2016 election. The Justice Department indicted the whole group in August – but their votes were counted two years ago.

This month, Texas officials busted a Mexican woman who posed as an American citizen and illegally voted in the 2016 presidential election. Thirty-eight-year-old Laura Janeth Garza will be deported after she serves 10 years in prison and pays a $10,000 fine.

Some frauds vote more than once – just like Bailey suggested. A New Hampshire couple voted in their own hometown – and then crossed the border and illegally voted a second time in Massachusetts in 2016. Grace and John Fleming face 14 years in prison if convicted.

Some frauds break other voting laws – like Crytal Mason, who illegally voted in Texas in the 2016 presidential election, even though she was on parole and barred from voting.

Not all of the frauds are even alive — Officials in Alaska said they saw “palpable evidence of voter fraud,” where 70 absentee ballots were put under a cloud – and 7 dead people voted by absentee ballot!

“It’s not a conspiracy theory, folks,” Trump said in April, and the proof is all around us.

The problem of phony votes and the possibility of stolen elections is already massive and growing all over the country – North, South, East and West.

Up north, in New Hampshire, Secretary of State Bill Gardner said 142 citizens had been flagged as possibly being registered to vote in at least one other state by the Interstate Voter Registration Crosscheck Program. His office was investigating 51 people, minimum, as of May.

In the southern states, look at North Carolina, where the Trump administration sees such potentially massive voter fraud that it’s seeking millions of voting records, most in one county.

Trump is trying to clean up the mess made by his predecessors – in both parties. They destroyed the economy and ruined the lives of middle class Americans, left the borders leaky as a sieve, and turned a blind eye to voting fraud.

Back in 2010, a federal contractor named Mike Ritchie was caught red-handed on film, telling his workers which candidate they should vote for. There are laws against that, but the Obama administration let it slide.

With Trump as president, there’s a new sheriff in town.

That’s why the socialists want to run him out of office and get things back to “normal” ASAP – by any means necessary.

Do you want to know what the future will look like if Democrats take over?

Watch the video below and imagine this happening in every union hall, welfare office, prison and barrio in the country.