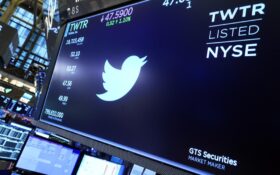 It’s been a tough week for Jack Dorsey, former CEO of Twitter, as well as an unknowable number of latte-sipping ex-employees fired because Elon Musk expects them to work. But it’s been a great week for truth, trust, and transparency with the latest releases of “The Twitter Files,” which show how an unelected bunch of Left Coast elitists banned a sitting U.S. president (and many of his followers)… even when they followed the rules.

Musk has authorized his team to pull back the curtain on exactly how, when, and what excuses Twitter (ex-)employees used to shut you up, ban you from “their” platform, or keep anyone from ever seeing what you wrote.

And most explosively of all, he’s shown the world how Twitter tried to silence the most powerful man in the world, then-sitting President of the United States Donald Trump, because they hate his guts.

Musk, who promised to change the social media platform’s practices when he bought Twitter for $44 billion in October, turned over its most sensitive documents to two award-winning journalists.

One of them, former New York Times journalist Bari Weiss, focused on how Twitter banned President Donald Trump in part five of the “Twitter Files.”

It deserves the attention of everyone who cares about the survival of free elections.

Most Twitter employees were outraged that Trump was able to be on Twitter in the first place.

By January 2020, Trump had two strikes against his account, with only one to go before being permanently banned — and his opponents combed through his Twitter feed for any word they could use to get rid of him.

That made them even angrier, because they found nothing.

On January 8, Trump posted two tweets, announcing that he wouldn’t attend Joe Biden’s inauguration and promising that the 75 million Americans who voted for him “will have a GIANT VOICE long into the future. They will not be disrespected or treated unfairly in any way, shape, or form!!!”

Even Twitter officials had to admit that there’s nothing violent or illegal about any of that.

Twitter’s Trust & Safety department, which handles policy about banning users, had to tell their co-workers they couldn’t ban Trump yet.

“Safety has assessed the DJT Tweet above and determined that there is no violation of our policies at this time,” wrote Twitter employee Anika Navaroli.

The policy official wrote that she was “not seeing clear or coded incitement in the DJT tweet” and added that “our team has assessed and found no vios” (violations) in Trump’s words.

But Twitter’s far-Left employees said they didn’t care. At least one of them argued that Twitter had to ban Trump because he wasn’t violating their terms of service.

“It’s pretty obvious he’s going to try to thread the needle of incitement without violating the rules,” one of them wrote.

The legal team tried to cook up new ways to trap Trump in a Twitter violation. Twitter’s Head of Legal, Policy, and Trust — an employee named Vijaya Gadde — raised the possibility that saying Republicans deserve respect could be considered “coded incitement.” That is, Trump was using one of those dog whistles that can only be heard by people on the Left.

A few tried to intervene on behalf of free speech.

The Woke mob ignored the “lived experience” of a Twitter user who tried to warn his fellow employees against the step they were taking.

“Maybe because I am from China, I deeply understand how censorship can destroy the public conversation,” the employee wrote.

The other employees lectured that their colleague, who had seen Communist repression up close and personal, didn’t understand: It would be different this time.

“We started labelling (sic.) his tweets when they became a threat to Democracy (sic. again),” wrote another. “Yesterday, he clearly tried to overthrow our Democratic system of government and showed no signs of remorse.”

Gadde decided that Trump’s comments about 75 million Americans really referred to the handful of anonymous, masked people who broke windows and rioted at the U.S. Capitol… not the 75 million he specifically mentioned.

Gadde pushed for Trump to be permanently banned even though he followed Twitter’s rules, and Jack Dorsey appears to have signed off on the order personally, booting Trump from the platform permanently.

Now Twitter — which allows representatives of the Taliban, Iran, and the murderous Chinese Communist Party to post freely — banned the president of the United States… because he stood up for Republican voters.

Trump supporters tried to launch Parler, but Amazon denied it a platform. Trump also launched Truth Social, which has yet to attract a stable following. CNN and MSNBC sneered that Trump had become irrelevant and had been de-platformed forever.

They spoke too soon. There’s a new sheriff in town.

Elon Musk reversed Trump’s lifetime ban and shut down the Trust and Safety Council, which he criticized for being obsessed with banning conservative political voices like Trump’s but doing nothing about rampant child pornography clogging the site.

“It is a crime that they refused to take action on child exploitation for years!” said Musk.

One of the former “experts” even complained that Musk “doesn’t really care as much about what experts think.”

But that self-praising nonsense gets it backward: Jack Dorsey and the Twitter employees that Musk fired didn’t care what the experts think. The “experts” said Trump had done nothing wrong. Twitter’s Woke mob ignored their analysis because they wanted his scalp and they got it—temporarily.

Musk deserves huge credit for showing us how Big Tech insiders rig the game against their users, no matter how well they follow the rules. They think Twitter is their own empire, and they’re the dukes, duchesses, and gender-neutral royalty that rules the roost.

Now, thanks to Elon Musk’s purchase of Twitter, they’ve lost their platform and been exposed as the self-serving frauds and liars they are. And America is better off because of it.