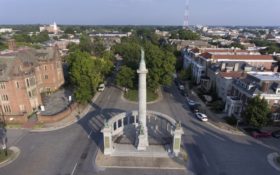 A commission studying what to do with the most prominent Confederate monuments in Richmond, Virginia, recommended Monday removing one honoring Confederate President Jefferson Davis.

The panel of historians, local officials and others that spent around a year studying and soliciting public input about the statues on the city’s historic Monument Avenue also urged the addition of permanent signage with historical context near the monuments.

Further, it said leaders should consider adding new monuments that would reflect a “more inclusive” story of the city’s history, the commission said in a more than 100-page report.

“In the course of the work, it became abundantly clear the majority of the public acknowledges Monument Avenue cannot and should not remain exactly as it is. Change is needed and desired,” the report said.

How to have more energy: get THESE out of your body as soon as possible [shocking] [sponsored]

Richmond, a former capital of the Confederacy, has five soaring Confederate statues along Monument Avenue, a prestigious residential street. The Davis statue, the report said, “is the most unabashedly Lost Cause in its design and sentiment” and should be removed, pending litigation or changes in state law.

A state law currently on the books, which the Republican-controlled General Assembly has shown no appetite for changing, prohibits local governments or others from “disturbing or interfering with” memorials to war veterans. The statute is at the center of a lawsuit playing out in Charlottesville over that city’s effort to remove two Confederate statues.

The report is not legally binding. Richmond Mayor Levar Stoney said in a statement that he would be studying its recommendations further before taking any other steps, though he said he agreed with the report’s finding that “something needs to change.”

“Richmond has a long, complex and conflicted history, and the Confederate statues on Monument Avenue represents a shameful part of our past,” Stoney said. “As I have said before, the statues on this beautiful street are Lost Cause myth and deception masquerading as history. They are monuments to Jim Crow that do not reflect the qualities of inclusivity, tolerance and equality we celebrate as values in our city today.”

When Stoney first announced the formation of the commission, he said the statues should not be taken down but should be supplemented with historical context about why they were built. But after a white nationalist rally in Charlottesville last summer descended into violent chaos, the mayor expanded the panel’s mandate to include removal as a possibility.

While the Richmond commission completed its work and a similar study took place in Louisville, Kentucky, many other U.S. cities moved more quickly after the Charlottesville rally to take down their Confederate statues or symbols.

For instance, four Confederacy-related monuments were hauled away in Baltimore just days after the rally.

In Memphis, Tennessee, city leaders used a legal loophole to get around a state law protecting historical memorials by selling the city parks where three Confederate leaders stood to a nonprofit, which swiftly removed the monuments under the cover of darkness.

In Kentucky, a panel formed in Louisville released a report Saturday saying public displays honoring the Confederacy were unwelcome and not representative of the city today.

In Richmond, the first monument, honoring Gen. Robert E. Lee, was erected in 1890, decades after the end of the Civil War.

The other statues — to Davis, J.E.B. Stuart, Thomas “Stonewall” Jackson and Matthew Fontaine Maury, an oceanographer and commander in the Confederate Navy — were raised in the early 20th Century, when Jim Crow laws were eroding the rights of black citizens.

A statue of black tennis hero Arthur Ashe, a Richmond native, was added to Monument Avenue in 1996, provoking a nationally publicized and racially charged dispute.

The report suggests that part of the Davis monument could be relocated to his grave at Richmond’s Hollywood Cemetery.