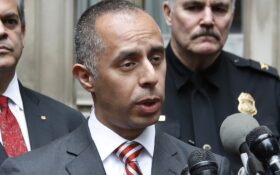 The Democratic mayor also signed an executive order formally apologizing on behalf of Rhode Island’s capital city for its role in slavery, urban renewal and other racist and discriminatory practices. The spending proposal now goes to the city council for approval.

“While we cannot undo the harm that has been done, I am confident these programs and investments will make great strides in closing the racial wealth and equity gaps that exist in Providence,” Elorza said.

Rodney Davis, who chaired the Providence Municipal Reparations Commission, applauded the mayor for issuing a formal city apology, as the commission had recommended. But he demurred when asked if he thought the spending proposal was the best use of the federal money, given the commission’s many recommendations.

“We feel like $10 million is nice, but it’s definitely not enough for true reparations,” he said. “We also recognize this is a city effort and true reparations have to be on a larger scale. It has to not just be government, but also private enterprise.”

Ray Rickman, a prominent Black historian and former state lawmaker who attended Thursday’s announcement, was surprised Elorza wasn’t more forceful in calling on Brown University to contribute to the city’s efforts. The Ivy League college, located on the city’s wealthy East Side, has faced its own calls in recent years to pay reparations to slave descendants.

Terrell Osborne, a Black resident who also attended the announcement, said he’d like to see the city form a foundation to help coordinate the myriad efforts proposed and to marshal more resources and support from outside groups.

“All I see is ‘Let’s spend the money.’ But then what?” he said. “Who is implementing these things? Where’s the follow up coming from?”

The reparations commission report released Monday listed a range of programs and efforts Providence could undertake to begin atoning for its extensive ties to the transatlantic slave trade and the centuries of racism and discrimination that followed.

But it didn’t recommend giving out direct payments to Black and Native American residents impacted by slave and other discrimination, as some had called for. Instead, it defined “reparations” as efforts that close the “present-day racial wealth and equity gaps.”