URGENT: Reward increases to $20,000 in search for kidnapped teen - The Horn News 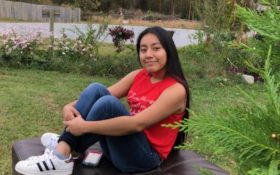 A total reward of $20,000 is being offered in the case of a 13-year-old girl kidnapped from a North Carolina mobile home park.

Relatives say the eighth-grader went outside last week to start a relative’s SUV to prepare to leave for the bus stop. Police say a man then forced her into an SUV and drove off.

The FBI says the SUV was found in Lumberton Thursday, several miles from the mobile home park. Police Chief Michael McNeill asked nearby residents to check their property for anything unusual.

Investigators are seeking help identifying a person seen on surveillance video near the scene.