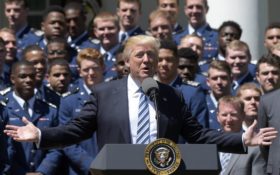 President Donald Trump promised to clean Washington D.C. of the political elite, and his most recent proposal is the ultimate plan to drain the swamp.

Trump declared Tuesday the U.S. government “needs a good shutdown” this fall to fix a “mess” in the Senate, signaling on Twitter his displeasure with a bill to keep operations running.

The reason for the plan negotiated between the Republicans and Democrats is that we need 60 votes in the Senate which are not there! We….

either elect more Republican Senators in 2018 or change the rules now to 51%. Our country needs a good "shutdown" in September to fix mess!

Many Trump supporters are cheering for Trump’s tweet, viewing it as a brilliant negotiating tactic.

The threat of a shutdown is likely a direct message to establishment Republicans opposing Trump’s proposed budget, whom Trump knows will want to do everything they can to avoid a government shutdown.

After advocating for a future shutdown, the president hailed the budget agreement as a boost for the military, border security and other top priorities.

“This is what winning looks like,” Trump said during a ceremony honoring the Air Force Academy football team. “Our Republican team had its own victory — under the radar,” Trump said, calling the bill “a clear win for the American people.” Late in the day, the White House said he would indeed sign the bill.

Budget Director Mick Mulvaney briefed reporters twice within a few hours to adamantly declare the administration’s success. He was joined at his second briefing by Homeland Security Secretary John Kelly.

Asked how the president would define a “good shutdown,” Mulvaney suggested “it would be one that fixes this town.”

Trump has repeatedly accused Washington of favoring political insiders, and he’s proven he’s not afraid to take severe action if necessary – even if that means shutting down the government.