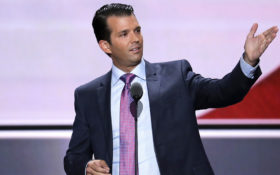 Donald Trump, Jr.’s wife was hospitalized after opening a letter filled with a suspicious white powder on Monday — and the message it contained has finally been revealed by law enforcement.

The letter was addressed to the president’s son, but his wife Vanessa Trump opened it while alone in her mother’s New York apartment. Upon discovering the alarming substance, she reportedly became ill and felt nauseated. She was rushed to the hospital as a precaution around 10:00am.

“You are an awful person. This is why people hate you. You are getting what you deserve. So shut the f–k up,” the letter read, according to The New York Post.

Upon realizing the letter was a terror threat, Vanessa ran out of the room, put the letter with the powder in a plastic bag, and immediately called 911 for help.

The substance was reportedly just cornstarch, and it was only the rush of emotions that made Vanessa feel ill, sources say.

The letter was sent to Vanessa Trump’s mother’s house because the location is “not a secure site” and doesn’t have screening for letters.

“Secret Service is not going through [her mother’s] mail,’’ an insider told The Post.

The president’s Secret Service team has opened an investigation into the incident. The letter reportedly was postmarked from Boston, Massachusetts.