Revealed: YOU are paying for Europe’s pro-refugee propaganda - The Horn News 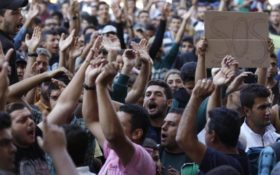 Donald Trump ran for president on a promise to keep America safe from terrorist “refugees,” but rogue bureaucrats and Barack Obama loyalists inside his administration are undermining him at every turn.

Their latest sabotage puts innocent lives at risk by promoting a program that calls his supporters racist – and forces them to fund it with their own taxpayer dollars!

The State Department is awarding a $200,000 grant to create propaganda telling Europeans that all Muslim “refugees” are harmless – and that anyone who thinks otherwise is an “extremist.”

Sponsored: FDA SABOTAGE [Has it affected you?]

It is proof that members of the Obama administration are still running rampant through the government, sabotaging Trump’s agenda by holding on to Obama-era ideas.

It’s even basing the grant in a city that was recently bombed by Muslim refugees.

The grant says it’s aimed at “at-risk youth” who are “susceptible to recruitment into violent extremism.” That sounds like it’s countering jihad recruiting websites and online radicalization programs.

The grant – which can be read online here – asks winners to develop “positive narratives concerning refugees and immigrant populations.”

The “extremists” they want to counter are any group opposed to letting hordes of Muslims pour through totally open borders.

The grant asks applicants to “get into the cyber realms of gamers, bloggers, and digital activist [sic] where the war of ideas is really being fought.”

The work will have “an emphasis on religious leaders, youth, and women.” They want to convince young people that refugees are peaceful and get clergy to say that anyone who opposes Muslim refugees is a sinful racist.

Sponsored: 35.6 million senior citizens secretly used as guinea pigs–Are you one of them?

This isn’t even a new program – it’s just a beefed up program the State Department used to brainwash college kids. And Facebook was involved, too.

Its top prize winner asked young people in New York to tune out “social media that has extremist messaging.” As an example it put a giant X through a sign that reads, “Banning Muslims will stop terrorism.”

The group produced a series of videos with Muslim refugees whitewashing their religion at taxpayer expense. In one, a female Syrian refugee named Dilan says, “Our religion never asks a person to kill another person. … Real Muslims are always looking for peace.”

Sponsored: Trump vs Crooked Hillary round 2?

“As a Muslim, I feel sorry for anyone who was killed in the name of Islam,” she says in an emotionless voice, without a trace of compassion. Then, she immediately starts complaining about how she was the victim of anti-Muslim bigotry in the U.S.

She said she wants all Americans to know that “ISIS [warriors] are not Muslim.” (She might let them know that; they think they’re following the Koran to the letter.)

It’s also not clear why U.S. taxpayer dollars are being used to promote Islam.

Ironically, the European grant is being provided by the U.S. Embassy in Belgium in Brussels. The terrorists behind the bombing that killed 32 people in that city last March either were refugees or posed as refugees.

The ISIS terrorists who killed 130 people in Paris got into France the same way.

And about 300 known terrorists entered the United States posing as refugees, according to former FBI Director James Comey.

Now, the U.S. wants to lower Europe’s defenses. But telling the truth about murderous Muslim terrorists won’t win you a grant from the State Department.

The fact that this grant can even be offered with Trump as president shows how deep the Deep State really is. Donald Trump won the election by promising to be “strong” on immigration. But the State Department is being run like Hillary Clinton is still in charge – and the greatest threat to world peace is Trump’s “deplorable” followers.

It winning a presidential election does nothing to change policy, what can?

If Donald Trump can’t halt the refugee invasion because of activist judges, at least he can prevent Americans from funding this propaganda. President Trump should stop this grant from being awarded at once and see that whoever designed it is fired immediately.